TV presenter and Mayor among crowds at sheepdog trials 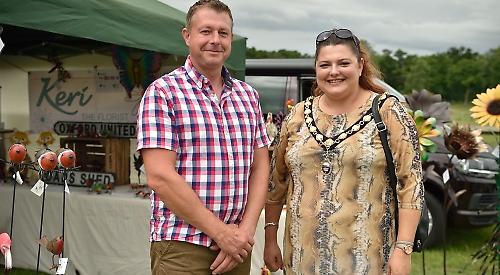 There were 56 entries, almost twice the number last year, ranging from novices to former members of the British team.

The event at the Henley Showground in Hambleden also featured a range of stalls selling food, drink and crafts and tractor rides for visitors. The guests included TV presenter Ben Fogle with his family and Henley Mayor Kellie Hinton.

Jo Taylor, manager of the Henley and District Agricultural Association, which organises the event, said: “It was a fantastic day. Everybody said what a lovely time they’d had.

“The event is becoming increasingly popular and we have some very successful competitors who compete at national level.

“The sheepdog trial and the annual ploughing match that we also organise are a very important part of what we do.

“It is our remit to inform and educate the people about the importance of farming and everything that goes with it and, of course, herding sheep does.”

Entrants came from as far as Herefordshire, Leicestershire and the Isle of Wight and the judge Rae Lutman came from Chichester.

Each dog started with 100 points and Mrs Lutman deducted points for faults.

The winner was Eamonn Lawless, from the Isle of Wight, with his dog Don.

Ms Taylor thanked all the volunteers for helping to organise the day and visitors for attending.

The association’s next event will be the 126th annual Henley Show which will be held at the showground on Saturday, September 9.