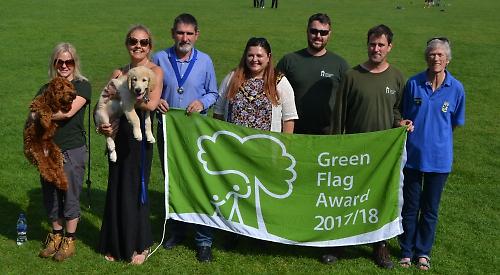 A RIVERSIDE beauty spot in Henley has been awarded a Green Flag for the fourth year in a row.

Mill Meadows was presented with the award following an inspection by judges from Keep Britain Tidy, which administers the scheme.

The award recognises green spaces which offer a wide range of facilities and are maintained to a high standard.

Mill Meadows, which has been called the jewel in Henley’s crown, is maintained by the town council’s parks team.

It hosts event such as the Chelsea Fringe Festival flotilla, Music on the Meadows and performances on the bandstand.

On Friday, the inaugural Party in the Park, organised by the Mayor Kellie Hinton, took place there.

Councillor Hinton said she was delighted to retain the award and thanked the parks services team and volunteers from the Gardening Buddies and Henley Wildlife Group.

She said: “People think parks services only look after Mill Meadows and Marsh Meadows but they look after the council’s whole estate.

“There really is nothing they can’t put their hand to. They are one of our most valuable assets and worth their weight in gold, so I can’t thank them enough.

“They are the unsung heroes and don’t get enough praise for the work they do. When they work in Mill Meadows they are the face of the council. It is my favourite place in Henley — it means the world to me and my partner as we had our first date here.”

Councillor David Eggleton, vice-chairman of the council’s recreation and amenities committee, said: “The Green Flag award is a real honour.

“We all need a pat on the back because it’s a team effort. I’m over the moon.”

Councillor Sam Evans, a member and former chairwoman of the committee, said: “It’s really well- deserved and I agree with Kellie about how hard the parks services guys work.

“They put their heart and soul into it — they love what they do and that’s what shines through. We’re incredibly lucky to have them.” Park warden Alex Bell said: “I grew up around here and it’s great to get this award.

“We work hard to maintain the standard and I love the reaction from the public that we get.

“Every award that we get is an achievement and it brings meaning to our job. We feel we’re being recognised and appreciated, not just by our employers but by the public too.”

A record number of Green Flags have been awarded in the UK this year with 1,797 parks, gardens, cemeteries, universities, museums, hospitals, shopping centres and canals meeting the criteria.