Nursing home matron who believes in power of smile retires 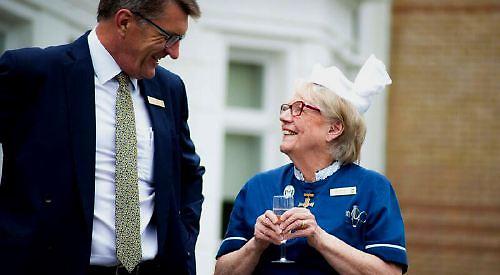 THE matron of a Henley care home has retired after more than three decades.

Wendy Eltze joined Thamesfield Nursing Home in Wargrave Road as a part-time sister in 1986 and was promoted to the senior role on a full-time basis in 1998.

The 73-year-old, who lives in Albert Road, Henley, says she enjoyed working there but wanted to be able to spend more time with her husband Denis, 72, their three children and seven grandchildren.

Mrs Eltze grew up in Shropshire and trained as a nurse in the Sixties before working as a ward sister at Hackney General Hospital in London.

She was following in the footsteps of her aunt Rosa Buckley, a district nurse who was made an MBE for service to the care sector, and her mother Christina Bates, also a matron.

After marrying her husband, an army officer from Rhodesia, now Zimbabwe, the couple lived in South Africa for several years but decided to move to Henley as their son Tim was a promising .

He attended Gillotts School while training with the junior GB squad at Caversham Lakes. Mrs Eltze said: “Nursing the elderly is very enjoyable and you definitely get the sense of making a difference in older people’s lives as well as those of their families.

“I was never interested in going into management — it’s an important role but I didn’t want to lose sight of the hands-on, caring side of things.

“There’s always been a great team at Thamesfield and it feels like a family. If we were ever short-staffed, I’d be in there working with the rest of the girls and hopefully setting an example as a good leader.

“I’ve also seen a lot of gap year students come through the home and it’s great to see them go on to study medicine after seeing care at the most fundamental level.

“The most important thing is to do the job with kindness and a smile at all times — it’s absolutely crucial. I love working with older people and think I had become a bit of a mother figure to the whole place.” Mrs Eltze’s colleagues marked her departure with a garden party at which she was presented with numerous gifts including a framed painting of Temple Island.

She also attended a farewell dinner with senior managers from Retirement Villages, which has owned the home since 2006.

She will be travelling to New York with her daughter Michelle in October and hopes to take a cruise with her husband next year.

Mrs Eltze said: “It was sad to say goodbye and I will miss it but I’ve been working for the past 55 years and feel it is time to see more of my family.

“I’m very grateful for all the celebrations that were organised as it’s wonderful to feel respected and appreciated.”

Her successor is Mandy Gates, an experienced nurse who has previously worked in the Channel Islands and shadowed Mrs Eltze for more than two months.