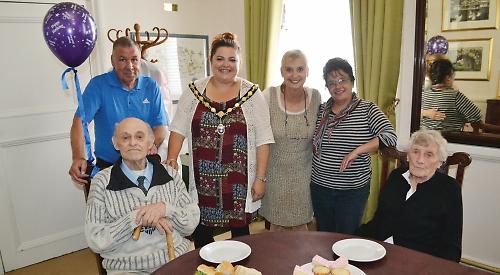 A TEA party to celebrate the 88th birthday of a Henley man was held at the Mayor’s parlour.

Mayor Kellie Hinton hosted the celebration for Ted Doughty after finding out that his son Keith was unable to visit from Suffolk on the day. It was organised by town council services manager Louise Hastings.

Mr Doughty, who lives in Albert Road, was joined by Monica Tomalin, 86, of King’s Road, her carer Raana Hameed and town sergeant Cliff Austin. The guests were served tea and cakes and were shown pictures by local artists John Piper and Lucy Cooper, which are hung in the parlour.

Mr Doughty was given a present of a mug and a birthday card by Cllr Hinton and the room was decorated with balloons.

Mrs Hastings said: “We wanted to do something special for Ted’s birthday because he doesn’t get out and about much any more. Everyone knows Ted and he is very popular. I also wanted Monica to come as they are senior people in the town.

“It was fantastic and they had a great time. Ted is always singing and always happy and pleased to see you, no matter who you are.

“There was enough food left for another little party at Ted’s in the afternoon.”

During the party Cllr Hinton found out that Mr Doughty knows her grandfather Graham Pye, who now lives in Alicante, but the two had not seen each other in about 40 years.

They then video-called Mr Pye for a chat before doing the same with Mr Doughty’s son.

Cllr Hinton said: “It was really lovely to be all together and it was a nice afternoon.

“I like using the Mayor’s parlour for things like this rather than just meetings. It’s nice to be able to celebrate the little things.”