Shopkeeper closes, saying rates and internet have made it harder 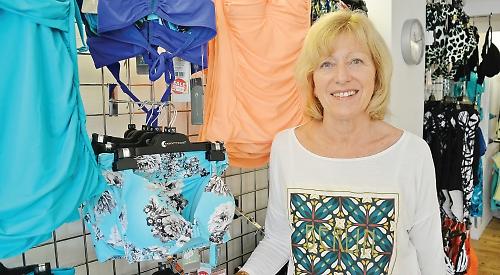 AN independent Henley shop that sells men’s and women’s skiwear and swimwear is to close.

Penny Badenoch, who has been running Sno and Sun Gear in Market Place for eight years, will cease trading on Tuesday as she is retiring.

Mrs Badenoch, from Benson, said she had enjoyed running the shop but rising business rates and competition from the internet were making it harder for small traders like her to thrive.

She launched the business in 2000 after returning from Paris, where she had been living with her family for most of the Nineties.

She has always been a keen skier and couldn’t find a shop selling high-quality clothing for the sport in the area. Her shop was initially based at the Greys Green Business Centre, near Rotherfield Greys, later moving to Market Place Mews in Henley. It then expanded its offering to include beachwear and moved to the larger premises in 2009.

Mrs Badenoch said: “I originally thought it could be a nice hobby but it soon became much bigger than that. It has grown and grown and I usually work six days a week.

“I have really enjoyed serving the community of Henley and have loved the camaraderie with my customers and staff.

“I’ve loved sharing people’s holiday stories and advising customers when they need it. I feel lucky to have built up a loyal following, including many people I’ve known since the very beginning.

“However, it’s time I was spending more time on the mountain myself instead of hearing stories about it.”

Mrs Badenoch added: “The internet has made it harder to compete. Pricing isn’t a problem as I’m able to match that but the internet is a ‘global shopfront’ with a lot more variety.

“Someone might come in and try on a jacket they really like, then discover it’s also available in another colour that I don’t have in stock.

“Once they know it fits, they can order it online and you can’t compete with that.

“If all shops are used in this way, pretty soon there won’t be a high street left. This is why businesses like coffee shops are doing well — they’re selling a service that you can’t buy online.

“I wouldn’t consider trading on the internet myself because I value personal relationships with customers. It just wouldn’t be the same without that.

“Business rates are also going up and up and unless councils and the Government address it, the independents will continue to struggle.”

Later this year, Mrs Badenoch will travel to India with her husband and she hopes to spend the first few months of next month on the slopes abroad.

She said: “I’ve had a very happy time and many customers say they’re sad to see me go but I want to enjoy my life while I’m still fit and healthy. There are things I will miss but I’m very excited about the future.” Other shop closures in Henley this year have included the Upstairs and Downstairs tea rooms, art gallery and photography studio Henley Studio and the Barbara Easton women’s fashion shop, all in Duke Street.

Amour Beauté, which is run by Raymond Duong, from Windsor, offers a range of services including facials, lash treatments and nails.

The unit has been empty since 2015, when Daltons closed following the death of owner Paul Dalton, who set up the business in the Eighties.