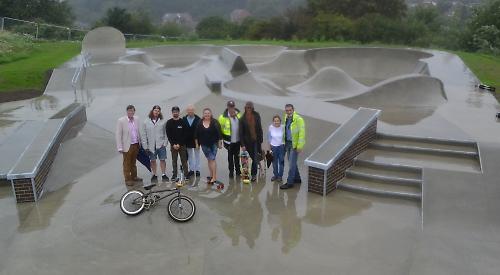 The concrete skate park has sunken obstacles rather than hollow metal ones, which will reduce noise, and will cater for BMX bikers, skateboarders and roller-skaters.

It was designed by Maverick Industries, of Dorset, for Henley Town Council and replaces the old skate park, which was built in 2004.

Construction work began in March, ending a six-year campaign by the Henley Skatepark Initiative, supported by the council.

The contractors only need to install new signs and tidy up the site before the facility will be open for use.

A celebration launch with demonstrations by professional skaters will be held later.

Dozens of people, including, skaters and councillors, attended the opening ceremony in the rain.

Colin Brathwaite, chairman of the Initiative, said: “What a magnificent day for Henley.

“Six-and-a-half years of tireless hard work and a mammoth journey has led to Henley having its own state-of-the-art, Olympic-quality skate park that will provide for residents for decades to come.

“The aim of the skate park is to encourage active and healthy lifestyles with a focus on youth development, equality, moral values and respect.

“We’d like to extend our thanks to everyone who has supported this project, particularly the Henley Residents’ Group councillors who got behind us from the start.”

Jimmy Lipscomb, vice-chairman of the group, added: “I’ve been here since day one and it’s absolutely amazing seeing it.

“This caters for all ages and abilities. A lot of the older generation who have stopped skating have told us they will dust off their skateboards and come down, which is fantastic.”

The skate park was paid for with a £100,000 grant from South Oxfordshire District Council, £75,000 from both the town council and Sport England and £20,000 from the Thamesfield Youth Association plus £6,000 raised by the Initiative.

An anonymous supporter loaned another £20,000 so the work could begin and the Initiative is now raising the money to repay this.

Councillor Hinton said: “In over six years as a councillor, I’ve never been as emotional as I was coming up here knowing it’s finished.

“Coming here, you can’t help but feel emotional and proud of the Skatepark Initiative and Colin, as well as others, who have worked really hard.

“Colin put his blood, sweat and tears into having this here, knowing people would be using it and having the time of their lives.

“It’s the proudest moment of my six years on the town council and, as someone who doesn’t skate, that’s a challenge!”

Councillor Dave Eggleton said: “It has taken a long time but all good things are worth the wait. I’m sure the kids will have a brilliant time down here.”

Councillor Stefan Gawrysiak said: “I’m absolutely elated that after six years of hard work we are bringing this project to fruition.

“It will be a fabulous sporting facility for the young people of Henley and older people too. At the full opening I’ll come down and give it a twirl!”

Russ Holbert, a director at Maverick Industries, said: “We originally met with the local user group back in 2011 and the design evolved over time to create what we believe will be a destination park for the UK.

“This skate park will really put Henley on the map. It’s one of the most exciting projects we’ve been involved with and will be a great venue for competitions and events.

“The energy and determination demonstrated by the Henley Skatepark Initiative sets a great example to other projects to show them what can happen when a community group is formed, working closely in partnership with the local council.”

If you would like to make a donation, email info@henleyskatepark.org