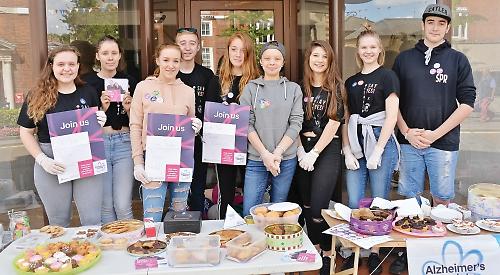 TEENAGERS from the Henley area raised £250 for charity by selling home-made cakes as part of a citizenship project.

The 16-year-olds, who recently took their GCSE exams, set up a stall in the porch of the former Hearns of Henley shoe shop in Market Place.

The youngsters were taking part in a week of activities under the National Citizen Service scheme, in which young people can learn new skills while helping in the community.

It is administered by Oxfordshire County Council, the education authority, which encourages participants to sign up in their final year of secondary school.

The students, who also volunteered at the Acacia Lodge care home in Quebec Road, Henley, chose to support the Alzheimer’s Society as several have had relatives affected by the disease. They were also encouraging people to join the charity’s Dementia Friends scheme.

Supervisor Clare Hogan said: “They’ve been very enthusiastic and worked together really well and got a lot out of it.

“They raised an impressive amount of money and lots of people were stopping to chat with them and find out more about the scheme. Hopefully, this will encourage them to continue taking part in community work after they finish the programme.”

Courtney , who lives in Benson and has just left Icknield Community College in Watlington, said she would continue volunteering after starting at The Henley College in September.

She hopes to take part in a 10-mile sponsored walk for charity in the autumn.

She said: “It has been great. We’ve done so much stuff that we wouldn’t usually do and it has really challenged and pushed us to try new things. I’ve found it very rewarding, made lots of new friends and will always have lots of good memories.”

Lauren Cox, from Emmer Green, who has just finished studying at Langtree School in Woodcote and is also about to start at The Henley College, said: “I’ve learned much about myself and realised that I have quite good leadership skills.

“We learned a lot about how people cope with dementia and how they’re cared for.”