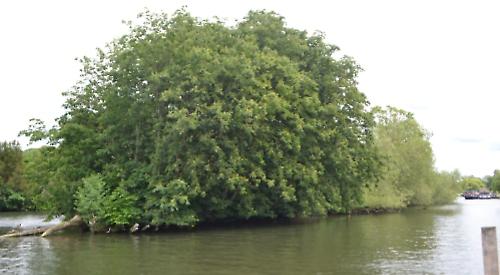 THE owner of an island in the Thames in Henley has contacted the town council after it threatened to take over the land because it was not being maintained properly.

East Eyot, a narrow strip of land covered in trees near Mill Meadows, is registered to a company in Liechtenstein.

In May councillors complained that it was in a state of disrepair and said the council could attempt to claim ownership in order to tidy it up.

Now town clerk Janet Wheeler says the council has been contacted by the company representing the owner.

She said: “We have now established they are at least corresponding with us and I think they would like to get something in place.

“They may ask us to monitor the island for them.”

The issue was first raised by Mayor Kellie Hinton who said her partner Ben Hinton began investigating ownership of the island six years ago.

She said: “He felt the island was in disrepair and people were using it for free mooring. It is now damaged almost beyond repair.”

East Eyot used to be known as Corporation Island and was owned by the council until 1907 when it was sold.