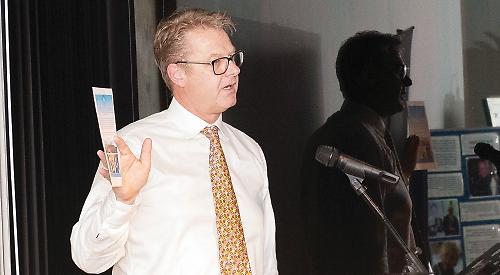 There was an auction in aid of the Alexander Devine Children’s Hospice in Maidenhead, which is due to open later in the year.

The four-course supper was cooked by guest chefs. The starter of cured smoked beef rump was prepared by Pip Lacey, who reached the final of this year’s Great British Menu.

This was followed by meen molee, a type of fish curry, prepared by Ganapati Prabu, head chef at Sindhu in Marlow. The main course was roast lamb cooked by festival patrons Ryan Simpson and Liam Trotman, of Orwells restaurant in Shiplake.

TV presenter and antiques expert Jonty Hearnen conducted the auction and donated a rare reproduction of a framed Marilyn Monroe photograph as a prize.

Other lots included a photoshoot with festival co-founder Kathryn Fell, who is a professional photographer, tickets to Legoland in Windsor, a chance to feed the animals at the McAlpines’ estate and dinner vouchers for Orwells. Mrs Fell, who is organising the festival with Tracey Pryce, of White Fox Events, said: “It was an excellent way to raise the profile of the festival.

“The chefs did an amazing job — everyone agreed their food was first-rate and there were a lot of empty plates at the end of each course.”

The festival will take place in Henley town centre on September 16 and 17. There will be about 30 producers of cheese, bread, beer, wine, meats and vegetables in a marquee in Falaise Square and another dozen or so at King’s Arms Barn, off King’s Road. All are based no more than 30 miles from Henley.

There will also be tastings, workshops and other events.