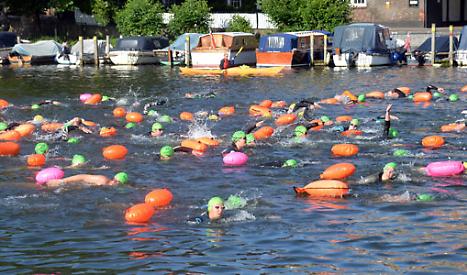 TWO former Olympians and a disabled woman were among those who took part in the Thames Marathon Bridge to Bridge swim on Sunday.

More than 500 people completed the 14km challenge, which is now in its seventh year, from Leander Club in Henley to Marlow Bridge.

Nerys Pearce, who was paralysed from the waist down after an accident in 2008 and uses a wheelchair, lives in Ascot but swims for Henley Open Water Swimming Club.

The former army medic completed the course in three hours, 23 minutes and 29 seconds and was among the top 60 finishers. She was joined by Olympic diving silver medallist Leon Taylor, who finished 10th after finished in just under three hours. The swimmers, most of whom wore wetsuits, were set off from 7.30am in four waves depending on their expected speed. The fastest participants arrived in Marlow at just after 10am.

The course was divided into four sections — Henley to Hambleden lock, on to Medmenham, then to Hurley and Temple Lock before the final push to Marlow bridge. At each the swimmers got out of the water for food and drink.

Alex , a former Olympic rower who now works for Invesco Perpetual in Henley, was part of the safety crew which swam 10km from the first rest stop in Hambleden to Marlow.

The event was won by Nils Young, who finished in a time of two hours, 41 minutes and two seconds. He swims for Cally Masters in Islington and completed a solo swim across the Channel last year.

The first woman to finish was Hannah Cannell in a time of two hours, 56 minutes and 49 seconds.

Among the locals to take part was Julian Glasspole, of Mill Lane, Shiplake, who finished in four hours, 16 minutes and 13 seconds.

Mr Glasspole, 53, a waste industry director, was due to take part in the swim last year but had to pull out at the last minute on the advice of his doctor.

He said: “It was a long way! It was really well-organised, as are all the Henley Swim events, and it’s a beautiful part of the river. It was a real challenge but a positive one.

“I was very pleased to finally do it. Last year I helped my friend Sue Nadin and this year she helped me.”

Henley town councillor Will Hamilton, who volunteered on the day and has taken part in other Henley Swim events, said: “This is the most brilliant event for the town and so well organised.

“The volunteers put in so much hard work but most important are all the different swimmers it attracts. They are absolute heroes to swim 14km .”

The last swimmer reached Marlow in just over 12 hours.

Organiser Jeremy Laming said: “It went very well. It was looking a bit dodgy with the rain on Saturday but it brightened up and turned into one of the best swims we’ve had.

“We had a nice blend of really fast swimmers and the winner was just a minute or two off the course record. The last guy was given a rousing cheer as he left the water. Everybody had a great day.”