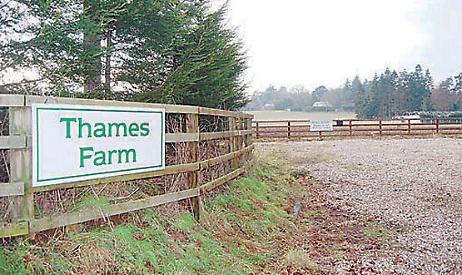 RESIDENTS of Shiplake are continuing to fight the development of 95 homes at Thames Farm.

A planning inspector granted an appeal by landowner Claire Engbers, saying new houses were urgently needed due to a shortage and that objectors’ concerns about road safety could be overcome.

So far more than 300 people have signed the petition which will be delivered to council leader John Cotton.

Mr Verrall, of Crowsley Road, said: “Every tier of local democracy was opposed to the creation of an urban island of 95 houses next to rural Shiplake at Thames Farm.

“An unelected civil servant from Bristol spent a few days listening to expensive lawyers, paid for by a local landowner, and democracy was crushed as the Henley and Harpsden joint neighbourhood plan was tossed aside.

“We call on [Councillor Cotton] to get the appeal decision referred to the High Court and thence reversed.”

Mrs Engbers first sought permission for 110 units in 2013 but this was turned down by the council and again on appeal.

She took her case to the High Court and a judge overturned the inspector’s decision, clearing the way for a second appeal.

Last year, with those legal proceedings still under way, she put forward a smaller, “greener” scheme to the district council.

Planning officers recommended approval because the council didn’t have a five-year housing land supply but councillors rejected it because Thames Farm was not included in the Henley and Harpsden neighbourhood plan, prompting Mrs Engbers to appeal.

Shiplake resident Cheryl Milne, who signed the petition, said: “We are not averse to new houses but want to have a say in where they are built. That is .

“Many of us contributed to the recent neighbourhood plan and gave , better options for development. Please listen to us.

“We need smaller homes integrated into the village, not large homes isolated on the periphery.”

Allen Hannah. who also lives in the village, said: “This approval runs roughshod over the local democratic decision-making process.

“How can a perceived need for housing in Oxford be best served by approving housebuilding in Shiplake? These houses will not serve the local community but will attract an influx of newcomers from outside the area.”

Ken Hydon, from Shiplake, said: “This decision is unrepresentative of the wishes of the community. The development will urbanise a rural Thames-side village, which has a village infrastructure, and a dangerous stretch on Reading Road.”

Other people have criticised the council and Henley MP John Howell for opposing the scheme, saying it will provide much-needed affordable housing.

Emily Farms tweeted: “Grown up and work in Henley but can’t afford to live here. Many friends and colleagues are the same.

“Is this all about the people or just egocentric politicians? People who live in affordable [housing] should have the opportunity to live in a nice area.

“You need to start thinking of the people whose needs are not met by the current housing situation.”

Lydia Ray said: “There are loads of us who would be lucky to be able to live in that location. Why are you so much against it? You don’t represent the young, only the wealthy.

“Blocking sites like Thames Farm using the excuse of the neighbourhood plan is crazy. If this site was allowed, it would help protect the plan.”

• A report in last week’s Henley Standard stated that when Thames Farm was submitted for possible inclusion in the Henley and Harpsden neighbourhood plan, it was among the least popular options at a public consultation. In fact, the site was the 10th most popular out of 17 put forward by local landowners, with 55 per cent of respondents supporting development there.