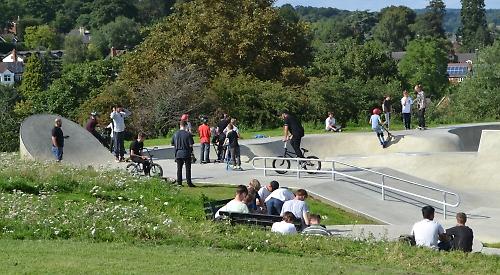 RESIDENTS of the Gainsborough estate in Henley enjoyed a family fun day.

Singer Phyl Vincent performed numbers from musicals accompanied by mobile pianist Tim Valentine and there was a drumming workshop and demonstration by Andy Fowler and Paul Glover of RhythmZone.

Parents and young children had picnics in the sunshine while skateboarders and BMX riders tried out the new £290,000 skate park.

The afternoon was organised by the Soha housing association to thank Gainsborough Residents’ Association for the community work it carries out throughout the year. Jackie Logan, Soha’s resident involvement manager, said: “We think it’s important to offer some free activities because the school holidays can be so expensive for parents. The association does amazing things in the community throughout the year and we believe it’s important to recognise that.

“Everyone really enjoyed themselves. We ended up having a big group drumming session, with lots of people playing different instruments, and there were people of all ages joining in.”

Henley town councillor David Eggleton, co-founder of the association, said: “The people who attended had a great time but we could definitely have done with more people.

“I don’t know if people were off doing other things because it was the first sunny day in ages but these things need the support of the wider community or it isn’t worth spending the money on.”