Menswear shop shuts as owner has had enough 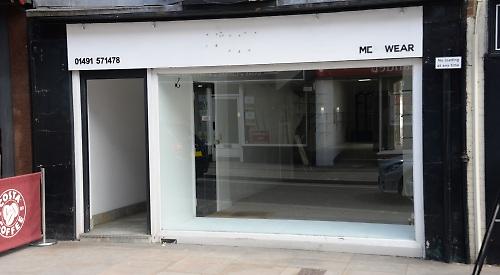 A HENLEY retailer has retired after more than seven years in the town.

Tim O’Sullivan, who ran the No 27 menswear shop in Duke Street, closed the premises on Friday and it has already been stripped and all the signage taken down.

He has moved out of his home in Rotherfield Greys to live in Chippenham.

Mr O’Sullivan, 64, who had previously lived in Watlington, intends to focus on his main hobby of painting and will be travelling to France to exhibit his work later this year.

He said his business costs had been rising due to high rents and business rates while his income was dropping as footfall in Henley town centre had decreased.

Mr O’Sullivan said: “I decided just after Christmas that I was going to retire as I was getting sick of the fashion business and wanted to do something different.

“I had already told my customers so they knew I was off. I just didn’t want to be on the high street any more because I felt like a slave.

“It’s all the usual things that other businesses have said before. High streets are in a terrible state and Henley is no different.

“In Duke Street alone we’ve lost Barbara Easton and the photographic studios over the past few months. People just won’t survive if they can’t get their costs down. If footfall doesn’t increase by the autumn, I think other businesses could go.

“The cheap and cheerful shops can still survive, as can those selling services, but there isn’t enough trade for high-quality businesses to continue.

“Art has always been in my blood and I had the opportunity to spend more time doing what I love, so it made sense to take it and move on.”

Mr O’Sullivan began trading as Sullivan & Sykes from a unit in Hart Street in 2009. He later rebranded as Sullivans and moved to Duke Street in 2012.

In May 2014 Sullivans Henley Ltd was wound up with more than £170,000 of debt. The shop was struggling to make a profit because of an unexplained drop in footfall at the start of the year, combined with higher rent and rates than he paid on the Hart Street unit.

According to the Companies House website, the business’s accounts are more than seven months overdue while its annual return should have been submitted in February.

Meanwhile, a Henley dry cleaners is expanding into Marlow. Reids of Henley will open a collection and delivery counter in the town but will continue carrying out all dry cleaning work at its premises in Reading Road, where there are 12 staff.

Later this year the Henley branch will have £150,000 worth of new equipment installed.

Owner Ian Reid, who opened the business in 1992, said: “We had been looking to move to bigger premises in Henley but in the end we realised our current site was perfectly located.

“There’s good parking and it’s where people expected to find us after 25 years so we would have been unwise to leave.

“However, I felt it was time for a new challenge so expanding to Marlow was a logical next step.

“It’s a busy, prosperous town like Henley and we already have quite a few clients there.

“Many of my staff have been here for well over a decade so we have a great team, which gives me confidence that we can keep the quality high as we take this next step.”

Mr Reid’s family have been dry cleaners for three generations and his grandfather Arthur used to run Warwick’s in Bell Street until it closed in the Seventies.

His parents then ran a dry cleaning firm in Northamptonshire, where he still lives.