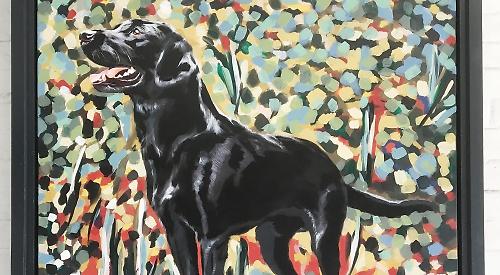 AN artist plans to install a 30ft “living wall” on the side of his house in Henley town centre to combat air pollution.

Clive Hemsley will cover the entire east-facing wall of Longlands House, a Grade II-listed three-storey Georgian property in Hart Street, with plants that absorb and digest pollutants from exhaust fumes.

He hopes to have it in place by the end of October and says it could be arranged to resemble his portrait of Jenson, a black Labrador, which he painted earlier this year for owners David and Emma Mole, from Shiplake.

The plants, which will include deciduous broad-leafed species and evergreen creepers like ivy, will be provided by the Toad Hall garden centre, off Marlow Road.

It will be an “active” living wall with a vacuum pump system from Treebox, a specialist supplier based in London, that willl suck contaminants towards it.

This is said to be 50 times more effective than a “passive” living wall with no pump. It will have its own water supply and a computer system to automatically draw water when needed.

The scheme will cost about £15,000, which Mr Hemsley hopes to recoup through sponsorship arrangements with local businesses.

Mr Hemsley, who runs an advertising agency in Marlow, has lived at Longlands House for 20 years.

He  came up with the idea of the living wall a year ago after having talks with Eco Henley, a pressure group that is part of Henley in Transition.

The group says green walls are needed in the town centre as levels of nitrogen dioxide, which harms the airways, are more than 50 per cent above the recommended safe limit in some streets.

There are also high levels of fine particulate matter, a type of soot which is similarly damaging. Mr Hemsley said he wanted to wait until the refurbishment of the almshouses, which are next to his home, was finished before proceeding.

He said: “I’ve always wanted to be a bit controversial and paint the side of my house with a Henley theme like rowing or something similar.

“That eastern wall is a real focal point for people coming over Henley Bridge but at the moment it’s pretty plain.

“I’d even have liked to do one of those drawings that looks three-dimensional when you look at it from the right angle.

“However, people might have complained because it’s a Grade II listed building whereas they can’t really complain about plants.

“I don’t even know my plants from my weeds so I’m waiting to hear from Toad Hall about what’s achievable and which plants are needed.

“If we can do the dog painting, I might paint it on the side of the house first as a guide. It’s all going to be good fun.

“Personally, I think banning lorries from coming into Henley is a far more effective way to clean the air but every little helps.

“I’d like to see the pavements in the town centre ripped up to install silver birch trees, like they’ve done in Fulham.”

Eco Henley believes two other living walls of a similar size are needed, including one at the crossroads of Duke Street, Friday Street, Reading Road and Greys Road, which is a pollution hot spot.

If suitable locations can’t be found, businesses could be asked to have windowboxes containing air-cleaning plants.

Val Stoner, of Henley in Transition, said: “It’s brilliant news that Clive is going ahead with this. Anything that can introduce more greenery to Henley while improving air pollution is wonderful.”

In 2015, a £3,000 living wall was installed at Leichlingen pavilion in Mill Meadows as part of Henley’s Britain in Bloom entry.