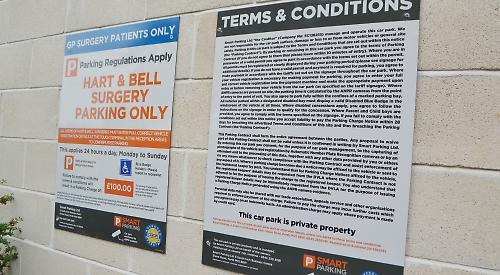 A COUNCILLOR who criticised “draconian” parking penalties at Henley’s GP surgeries has now been fined twice himself.

Ian Reissmann claims he was incorrectly ordered to pay £320 for allegedly breaching new rules at the car park for the Bell and Hart surgeries, off York Road.

His is the latest in a series of cases in which people claim to have been wrongly fined.

The system came into effect in April following a long-standing problem with shoppers abusing the car park.

It requires patients to enter their vehicle’s registration details on a touchpad at reception to receive up to 90 minutes’ free parking. There is a 15-minute grace period for drop-offs and collections.

The car park is monitored by automatic numberplate recognition cameras and when the surgery is closed at evenings and weekends, residents of neighbouring streets may park there free of charge.

Councillor Reissmann says that he was fined twice over a weekend in May when he used the car park as he was living in York Road.

He says Smart Parking, which runs the parking scheme, had failed to add his car’s registration number to its list of exempted vehicles. He then moved to Gainsborough Road but the notifications weren’t forwarded on until Smart Parking had issued a second set of demands in which each fine had been increased to £160.

The Bell surgery asked the company to cancel the penalties but Smart Parking says Councillor Reissmann must challenge them in court, which he dubbed a “malicious prosecution”.

In May, Cllr Reissmann wrote to health chiefs saying the new system was not working properly. He said: “We support the proposals to control and restrict parking. However, it does seem draconian to impose £100 fines for all apart from the disabled, frail and elderly after 15 minutes.”

This week, he said: “I still hope the surgery will be able to cancel my tickets but this isn’t about me — I’m more concerned about the impact on others in a more vulnerable position.

“I understand that the scheme is necessary as these parking places are needed for patients.

“The main problem is the large number of false positives which the system generates. I understand that more than half of tickets are being rescinded. It seems very unfair to punish the elderly and sick for making an honest mistake. The operators do not appear to be at all sympathetic.

“As I understand it, the company keeps all the income so there is an incentive to collect as much money as possible without considering the community.

“As the scheme has been introduced to keep much-needed spaces available for patients rather than to make money, this incentive seems perverse.

“It is a pity this was introduced with little notice and without consulting the community. These are important community services and we need to make sure people are able to access them.”

Ian Clarke, who lives in Cromwell Road and is retired, says many people have been caught out by the system.

He said: “My neighbour has parked there and been sent two fines. Another friend has been fined twice on the same day.

“Something needs to be done about it as the company is preying on old people. I can’t even read the machine they use — my doctor had to come out and do it for me — so how do they expect old people to do it?

“Receptionists can do it but if they’re on the phone there is a delay and you only have minutes to get your details in.”

The surgeries have apologised for any inconvenience or upset during the switch to the new system but insist they had to take action against shoppers preventing patients from parking. They say the signage is clear and the majority of patients were alerted to the changeover by text message and email.