Visitors spark concern after parking by river for barbecue 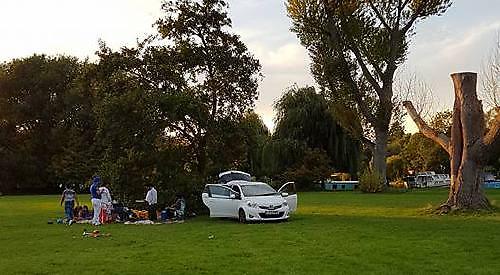 A GROUP of visitors sparked concern when they drove two cars on to riverside meadows in Henley and then lit a fire.

Police were called to Marsh Meadows, where open fires are banned, after Mayor Kellie Hinton read complaints about them on Facebook.

But by the time officers got there, the group of about 10 people had left.

The incident happened on Wednesday evening last week when a black BMW and a white Toyota were parked on the meadows and the occupants sat on the grass and lit a fire as if they were planning a barbecue.

Councillor Hinton said she called police to ask them to move the visitors on.

“Cars aren’t allowed on there,” she said. “We don’t want people getting the idea that this is allowed.

“Of course we want people to come here and enjoy our riverside, like we enjoy it ourselves, but sometimes when people go to another town they might not treat it like they would their own home.”

She said she believed the group had made an “honest mistake” and would have moved on anyway.

Cllr Hinton said the gate from the Mill Lane car park should have been locked but it was broken.

Barbecues in Marsh Meadows were banned in 2013 following complaints but the ban was lifted the following year when the town council installed tree stumps with a steel plate nailed to the top where barbecues can be placed. Barbecues on stands are also permitted but open fires are not.

Councillor Hinton added: “This is a problem which has been going on for decades. As and when things become a real problem we try to find solutions.

“Parks services do a fantastic job but unfortunately they can’t be there all the time. What we need to do is educate people.”

She promised to raise the issue at a meeting of the council’s open spaces sub-committee on September 29.