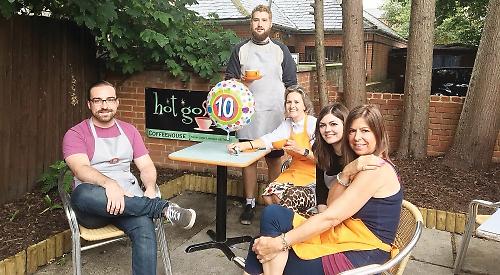 THE Hot Gossip coffee house in Henley marked its 10th birthday on Tuesday.

Lorraine Hillier opened the business in Friday Street in 2007, so it is now the town’s oldest independent coffee shop.

Councillor Hillier, who is also Henley’s Deputy Mayor, said: “I hadn’t a clue when I opened. I didn’t know even where you got the food from! I was an absolute novice and how I have survived I don’t know.

“I’d like to say a huge thank-you because I couldn’t have survived without the loyalty of local people. Tourism is great — it’s the icing on the cake — but you can’t survive without your locals.” She also paid tribute to the loyalty and hard work of her staff.

Famous faces to have visited the café over the years include the late Jon Lord of Deep Purple, Led Zeppelin lead singer Robert Plant, who ordered spicy parsnip soup, and actor Orlando Bloom, who dropped in to use the toilet.