Why I love pretending to be zombie and scaring people 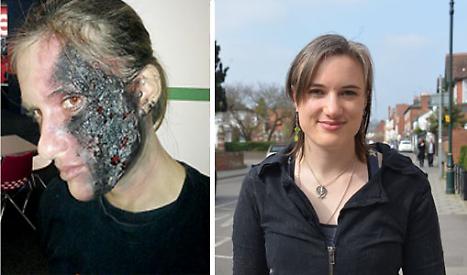 NATASHA ROBINSON says she has found her calling. She is a professional zombie.

There is nothing that she enjoys more than being covered in fake blood and wandering around like the living dead while being “shot” at.

The 35-year-old former Henley schoolgirl works for Zed Events, an experience company offering a twist on the paintball phenomenon.

It charges people to come and chase around the “undead” at the former Friars Walk shopping centre in Reading, which is now derelict.

“I really enjoy the work,” says Natasha, who began as a sort of “zombie trainee” four years ago and was recently promoted to the management team.

“I love playing about with different types of make-up and, of course, it’s just great fun to be running around in the dark and scaring people.

“After a tough day, all that screaming and shouting is a really good stress reliever.”

Natasha, who also works as a part-time admininstrator for a management consultancy in Reading, is a former pupil of Trinity Primary School in Vicarage Road, Henley.

She attended Headington School in Oxford and then Uppingham School in Rutland before studying for an archaeology degree at the University of Bristol. She then trained as an IT specialist and has had various jobs in the Reading area.

Her parents Paddy and Joy still live in St Andrew’s Road and her younger sister Katrina is retail manager for Henley Royal Regatta.

Natasha was introduced to Zed by a friend working for the company and so enjoyed the role playing that she kept going back.

The firm’s customers are groups of up to about 20 people who visit the three-storey former shopping centre in Friar Street to be chased around by hordes of the undead.

They must “survive” by shooting the zombies with specially modified rifles so that they are properly “dead”.

Natasha is on a roster of about 50 “zombies” who work different hours of the week depending on their availability. The busiest times are Fridays and at weekends.

The actors apply their own make-up using a mixture of skin paint, fake blood and “wounds” made from silicone putty that hardens to a flesh-like consistency.

Natasha says: “The first time I did it, there was quite a bit of learning involved. We were taught about costumes and make-up but the most important thing was to know how to scare the bejesus out of people!

“We had a briefing on how to move like a zombie, which is mostly a slow shuffle but in some wider, open areas you can speed up and charge towards the customers. It adds that element of fear because they don’t know what they’re going to get.

“The sounds we make vary from person to person because everyone has a different voice box but it’s a mix of groans, growls and really throaty noises.

“I discovered that I have a really loud, high-pitched scream like a banshee, which isn’t in the traditional zombie vein but it certainly adds to the effect. It can be very unnerving for someone wandering around this silent, empty shopping centre to suddenly hear this scream.

“Once, at the end of a session, a customer asked us ‘who was doing the screaming?’ and I crept up behind him and let out a scream. He jumped like you wouldn’t believe.”

A lot of Zed’s customers are stag parties and people wanting a different type of “works do”.

Natasha says: “I love it when the stag comes dressed in something unusual — we’ve had a tiger outfit and someone in a swimming gear with children’s inflatable water wings, which was brave.”

The guns shoot blasts of compressed air. However, until recently, they fired plastic ball bearings, which travelled at speeds of up to 150ft per second, three at a time.

Natasha and her colleagues used to have to wear gum shields as the bearings could knock their teeth out if they were struck in the face by a stray shot — customers were instructed not to shoot the zombies in the head.

She says: “On one occasion I leapt out of the darkness at someone and they panicked and shot me in the mouth. I would definitely have lost a tooth without the gum shield and I still have a big lump on my tongue from that.

“There used to be a bit at the end of each session where all the zombies would charge at the visitors in a group and we’d get shot at with an absolute hail of bearings.

“You would always have to take a deep breath and psyche yourself up for that. You’d usually end up with a few bruises from where you’d been hit.

“Now we use empty paintball guns, which have their pros and cons but it’s nice for customers to be able to shoot us in the head since that’s the classic way of killing a zombie in most horror films “You can still get bruised from hitting the floor when you ‘die’.

“It’s fair to say you have to be prepared for a bit of rough and tumble to enjoy this job.”

Natasha used to sometimes play a character called Bobo, a zombie clown with a ginger wig and a deep “gouges” in her cheeks.

She says: “Bobo would absolutely scare the **** out of people because it combined zombies and clowns.

“I remember one time I managed to make two customers run straight into one another, drop their guns in terror then run off screaming in the other direction.”

Applying make-up before each session can take up to 90 minutes as the zombies must create features such as veins, cuts, burns and rotting patches of skin.

They also wear tinted contact lenses and colour their teeth black or yellow with a special enamel paint.

Natasha says: “We need to have a fairly consistent look but there’s a lot of freedom and flexibility within that.

“You have to get lots of different shades on your skin so that it looks ‘dead’ — if you just paint it white you’ll look ghoulish but not necessarily like a zombie.

“The tooth paint generally comes off with brushing, though occasionally you get the odd stubborn bit.

“I tend to darken up my ears and there was one time when I realised I’d been going to my office job for half of the week with purple ears, although I don’t think anyone noticed.

“I had never worn contact lenses before and it took 20 minutes to get them in on my first go. I still struggle with them but I’m getting better.

“We have a cupboard full of torn and ‘bloodstained’ clothes for people to use but most people provide their own. It’s easy enough to get some jeans from a charity shop and I’ve got a big bag of clothes at home that I use for my zombie work.”

Natasha met her partner Mike Buckley through Zed. He was working at a second site the company had in Warrington when it hosted an event for the Reading team in 2014.

She recalls: “The very first time I saw him, he was dressed as a zombie and tied to a tree while getting absolutely pelted with ball bearings.

“Someone from our team had come dressed as the Terminator and had brought a fully automatic gun which they were offloading at him. We got chatting afterwards and it all took off from there.”

Now Mike also works for the management team and the couple live together in Reading.

Natasha, who is a member of Henley’s Trinity Hall Rifle Club, says her zombie work provokes different reactions from friends and colleagues at her day job.

“Some people think it sounds amazing whereas others don’t quite know what to make of it,” she says. I know Mum quite enjoys telling people that her daughter works as a zombie just to see the look on their faces. It’s certainly a good ice-breaker and a talking point at parties!”

She has no plans to give it up. “You’ve got to really want to do it and love it otherwise you wouldn’t last very long,” says Natasha.

“When I started this, I hadn’t really thought about whether I would stay in the long run but it’s so much fun that I’ve got no reason to stop. I’m really glad to be on the management side of things now and I’m happy to stay for as long as the company’s going.”