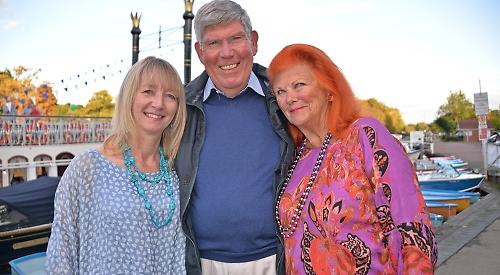 SIXTY supporters of the Chiltern Centre for disabled children in Henley enjoyed a cruise on the River Thames to thank them for their loyalty.

They are all members of the charity’s “friends” scheme who give a regular donation to the centre in Chilterns End Close, off Greys Road.

When the group boarded Hobbs of Henley’s The New Orleans they were each given a “sundowner” cocktail made using Mr Hobbs gin.

They were entertained by classical guitarist Billy Wayman as the boat made its way upstream towards Shiplake lock and served Indian-style canapés cooked by Hasan Chowdhury, manager of the Spice Merchant restaurant in Henley.

A raffle with prizes including a bottle of Mr Hobbs, a voucher for the Temptation gift shop in Bell Street and meals at the Spice Merchant and Hotel du Vin in New Street raised £360.

Emma Lerche-Thomsen, the friends scheme’s membership manager, said: “It was a lovely day with a very relaxed atmosphere. Everybody was chatting and enjoying the opportunity to make new friends and catch up with old ones. It wasn’t about raising money but thanking people for their support. Regular gifts make a significant difference to small charities because it gives them a guaranteed income.

“We’re very thankful to Hobbs of Henley and the Spice Merchant for giving their services free of charge.”

The charity is to host a fund-raising Bollywood supper at the Spice Merchant on October 19 and a Three Tenors concert at the Kenton Theatre on October 28. For more information, email chiltern@chilterncentre.org.uk