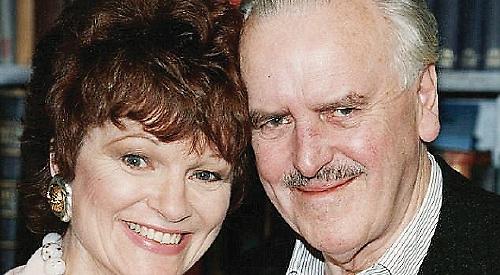 THE widow of the late actor George Cole is to close her vintage shop in Henley.

Penny Cole, 79, says she plans to shut Vintage Turnaround by the end of this month as her lease is coming to an end and because she is “knocking on a bit”.

The former actress, who lives near Stoke Row, has run the business on the Newtown industrial estate for three years but now plans to pursue other ventures, including returning to writing a sitcom.

Mrs Cole, whose husband died two years ago, aged 90, underwent two hip operations at the King Edward Hospital in London in the space of five days in May.

She said: “I think I need to do something with my life while I can. I’ve had a very bad year with three calls to hospital and two operations but I’m beginning to get stronger. I’m doing very well.

“I took the shop on a three-year lease because we didn’t know quite how near the end George was and he was very keen for me to have some interest outside the home where I could get back to him if he needed me.

“I had started writing a sitcom and had done five episodes and George said it was good and would I finish it because there was a part for him and a part for Liz Smith, who’s also gone.

“It was very much angled on the fact that older people aren’t allowed choice — they are told where they have to go and what they have to do. It is about a group of actors who take their lives into their own hands.

“I left them all in a pub on the south coast and they have been there a couple of years now, so they’ll be absolutely legless — I think it’s time I let them out!

“Throughout the 50 years that we were together, George constantly said, ‘oh darling, I wish you’d write, please write’.

Mrs Cole said she would also like to help charities or voluntary groups.

“I like to be useful,” she said. “I did wonder if I could help with reading for the blind. I do lots of voices — I’m a bit over the hill but I could still use the tools of my trade.

“While I’m able and while I can drive, I want to get on with being useful to the community.” When Mrs Cole opened the shop, she stocked it with items from the house she and her husband shared for five
decades.

Then customers would bring in their old clothes, furniture, decorations or household items to be sold with the profits being split 50/50 between the seller and the store.

Mrs Cole said she would miss having her business, adding that she had enjoyed meeting and chatting to her customers.

“I’ve met some wonderful people who have become friends and who would come in and say, ‘what’s new, what have you got?’

“We would have chats and I got to know them and they were very supportive to me when George went.”

She added: “I was really trying to provide somewhere where people could get things that perhaps they wouldn’t be able to afford when they are at their original selling prices. The prices were tremendously reasonable because there was a lot of designer stuff.

“It’s lovely that I did provide something that mattered to some people.

“It’s a lovely space but the parking has become a problem. It’s got terribly crowded.

“Instead of moving on to somewhere else I think I need the time. I don’t want the discipline of having to be there every day — I would like time for myself.”

Vintage Turnaround is still open on Thursdays, Fridays and Saturdays and people can drop in, by arrangement, on other days.

Clothing, furniture and shop fittings will be sold at reduced prices as Mrs Cole must vacate the unit by October 14.