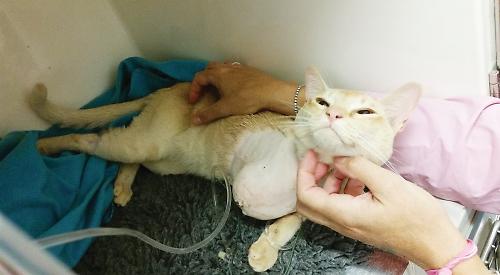 A FAMILY have told of their shock after their pet cat was shot and lost a leg.

Zeus, a one-year-old Burmese Red, is believed to have been attacked with a shotgun as pieces of shrapnel were found in his chest.

He was discovered badly injured by Simon Barnett and his daughter Zara, eight, at the back door of their home in Lower Assendon on Thursday last week.

“It was a big shock,” said Mr Barnett. “He was pretty much covered in blood underneath his body and his leg was bent like you would expect to see if it was broken.

“He could stand up but couldn’t really walk and was in a huge amount of distress. It’s not what you expect to find when your cat’s meowing at the back door. Zara was really, really upset.”

Mr Barnett, 45, took Zeus immediately to the Henley Vets in Reading Road, where an X-ray confirmed his right foreleg was broken.

The staff initially thought he may have been hit by a car but while performing surgery to remove his leg they discovered the shrapnel.

Mr Barnett, who runs a marketing business, said: “It was a complete shock. It changes your perspective on what’s happened to ‘how do I find out who has done this? Who would do it and why? It really makes me angry that someone decided they were going to do this. I can’t believe it was an accident.”

His wife Juliet Machan, 47, a marketing director, said: “All the shrapnel was in Zeus’s chest. The vet said it was ‘a bloody mess’. They gave us about four pieces.

“He had been shot, they think, while he was on a wall or in a tree and as he has fallen he has broken his leg. It wasn’t kids messing around — this was shotgun, so it’s highly likely that it was an adult who knew what they were doing.

“We’re in shock. It’s one of those things you don’t expect to happen anywhere, never mind in Henley.”

Mrs Machan said Zeus was a gift for her daughter’s eighth birthday in November and they had formed a close bond. Zara is a pupil at Valley Road Primary School in Henley and the couple have another daughter Eva, 12, who attends Millfield School in Somerset.

Mrs Machan said: “He’s definitely Zara’s cat. He sleeps next to her usually on the bed so he’s snuggled in with her.

“I’m more concerned about the affect it’s having on her. We have had to sleep with her every night because she won’t go to bed on her own. I’ve had to lie there until she goes to sleep and we have to promise we’ll stay with her.

“She wouldn’t go riding at the weekend because she’s too sad.

“We only moved here in June and to live somewhere three months and have your cat shot makes you feel slightly uneasy, especially if you have got children.

“Zara said to me, ‘if somebody shot Zeus and he’s such a nice cat, why wouldn’t they shoot us?’”

Zeus was allowed home on Tuesday and the family are taking extra care of him as he recovers.

Mrs Machan said: “He wants to be cuddled, he’s a very affectionate cat. We were lucky that we had insurance. It has been about £4,000 in vet bills so far.”

The family have also been giving Eva regular updates.

The shooting has been reported to Thames Valley Police.

An RSPCA spokeswoman called the attack “heartless” and urged anyone with any information to call the charity in confidence on 0300 123 8018.