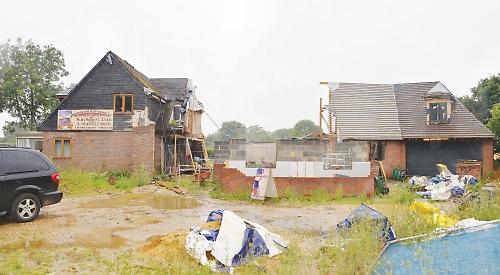 A FAMILY who paid a Henley builder £135,000 to extend their home have been told his work is sub-standard and must be torn down.

Naunton and Dawn Cheesman hired Mariusz Noga to extend their five-bedroom property in Bix at the end of 2015 but earlier this year he suddenly abandoned the project half-finished, leaving most of the house exposed and uninhabitable.

Now South Oxfordshire District Council’s building control officers have refused to approve the work he did do because it is structurally dangerous.

As the Henley Standard reported in July, the Cheesmans, their five children and Great Dane Blue are confined to a small section of the building with a leaky roof and no central heating or even an internal staircase.

Now they will have to pay at least £30,000 for the demolition and many thousands more on the shell of a new building.

Having already spent more than half of their life savings on the project, they don’t know if they will have enough money to make the inside habitable. Mrs Cheesman said: “We’ve had to bring in new builders to take it all down so that building control officers can approve each stage of construction from the foundations up.

“That should have happened the first time, of course, but it seems Mariusz got to a certain point then just carried on building and didn’t get it inspected as he was meant to.

“We’ll be asking for very clear guidance from the council so that we know each stage has been passed and signed off before we continue.

“It’s going to be a costly and laborious task to get this back on track. Every day feels like a chore at the moment but we’re doing our best to take it one step at a time.”

Mr Noga, who trades as Mariusz Builder, made a series of major blunders, including:

• Not leaving a gap of about 20cm between the outer brick wall of the extension, which was to house a sixth bedroom and a garage, and the inner layer of insulation. Instead, the two layers were either touching or less than 1cm apart, which offers no protection against damp. This cannot be rectified with a simple adjustment so the walls must be demolished.

• Failing to line up one corner of the roof with the corner of its supporting wall, which puts the building at increased risk of collapse.

• Building a roof line with a sudden “step” at one point rather than a smooth slope, which would make it impossible to lay roof tiles correctly. Some tiles were fixed with a single nail when four are needed.

• Digging out a basement for an additional cost of several thousand pounds that must now be filled in.

• Building the basement walls only a single breeze block thick when they should be twice that thickness and failing to install a waterproof outer lining first, so the blocks have been infiltrated by moisture and the basement could eventually have caved in.

• Leaving electrical cables exposed to the elements because supporting roof joints have not been nailed together tightly.

Mr Noga also failed to properly fence off the building site, where about 40 discarded beer cans were found.

Mrs Cheesman, an illustrator, said: “The building regulations inspector was absolutely mortified by what she saw. She said the electrical cables were so dangerous and there was no professional fencing around the site.

“Things weren’t being done to the letter but Mariusz would leave his workers to their own devices and I think they were totally out of their depth. They didn’t know what they were doing and it fills me with fear to think my children could have been playing in that basement.”

Mrs Cheesman has reported the builder to Oxfordshire County Council’s trading standards officers, as have several other former customers who say they were also left out of pocket for unfinished work.

Mr Noga, who is believed to have left his home in Damer Gardens, Henley, and is now living in High Wycombe, has denied that any of his work was sub-standard and says it was all approved by the district council.

He said he did have money problems because clients hadn’t paid their bills but this was resolved and he was trading as normal.