Couple leave award-winning pub but stay on at other one 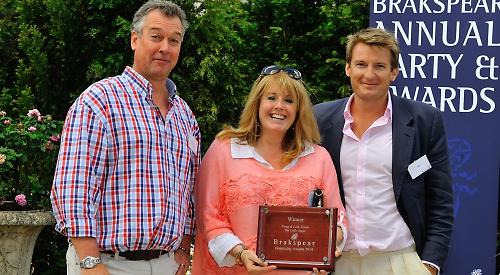 THE landlords of an award-winning Henley pub are moving on after more than a decade.

Doug and Lolly Green, who took charge of the Little Angel in Remenham Lane in 2004, have sold their lease to Henley pub operator Brakspear, which will run it as part of its managed estate.

The couple, who live near Peppard, also run the Cherry Tree Inn at Stoke Row and say they want to focus on this as well as pursuing new business interests.

Mr and Mrs Green  used to live in London but moved away as they wanted to run a country pub and took on the Little Angel.

They were also the tenants of the Unicorn at Kingwood for about four years and bought the lease on the Cherry Tree, which they operate through their business Splash Inns, five years ago. In 2014 the Little Angel won an award from Brakspear following an anonymous inspection in which it was rated on all aspects of hospitality, from cleanliness and servicing to marketing.

The following year, it was runner-up in the restaurant category of the Best Thames Local awards, which name the best places to eat and drink along the River Thames.

Mr Green, who was previously a chef and hotelier, deals with the day-to-day running of the couple’s ventures while his wife, who used to work in music and fashion, is in charge of marketing.

Now he is hoping to take on freelance consultancy work in hospitality and start new food and drink ventures outside the Henley area. Mr Green said: “It has been an interesting journey and we’ve made a lot of good friends and memories along the way. Henley is a great town and we love it to death.

“We’re sad to be leaving but Brakspear will do a great job of taking it to the next level.

“They’ve got some fans and some not-so-much fans but I think they’re very forward-thinking and a great choice.

“The team we’ve built up will still be there and I’d like to thank them for their contributions as they’ve made working here such a pleasure.

“They’ve made us one of the most popular pubs in the area and I’m not just saying that arrogantly. It’s a fact and it means Brakspear will be in a strong position.

“I’ve been gone less than two weeks and I’m still ringing every day to remind them to update the blackboard. That’s more just out of habit as they know exactly what they’re doing.

“Having just turned 50, I found the pub was taking a bit more time than I’d hoped. I wanted to take a holiday with my wife, have a bit of a break and focus on what I want to do next.

“We’re still very attached to this area and love all the events that happen in Henley.

“It really comes alive over the summer and we’ve enjoyed big events like the regatta, not only because they’re lucrative but because of the atmosphere they bring.”

“It’s a great business that Doug has created and we have no plans to change it. The current team will all be staying so it’s very much business as usual.”