Playing fields are the best site for my primary school 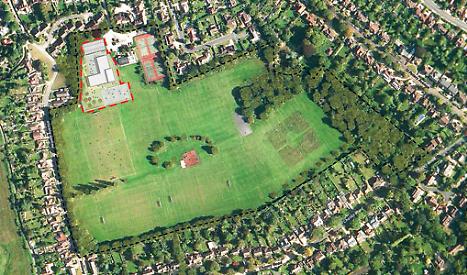 MAPLEDURHAM playing fields not only the ideal site to build the new Heights Primary School but the only option.

That’s the view of Karen Edwards, who has been headteacher of the free school since it opened in September 2014 in temporary accommodation off Gosbrook Road, Lower Caversham.

The school was founded by a group of parents to help meet a shortage of primary places north of Reading but the search for a permanent site has caused controversy.

Out of about 40 suggestions, five sites were included in a public consultation exercise carried out by Reading Borough Council before the playing fields off Upper Woodcote Road emerged as the overwhelming favourite with almost 70 of the vote.

The Education Funding Agency, a government body, then offered £1.36million to improve leisure
facilities on the playing fields in return for a lease on 1.2 acres of the 27-acre site for the school.

An alternative proposal called Fit4All was put forward by the Mapledurham Playing Fields Foundation, which doesn’t want the school built there and instead wants to lease the fields for fund-raising purposes. Mrs Edwards, headteacher of Sacred Heart Primary School in Henley, says the playing fields site is at the centre of the school’s catchment area and has the best access.

“I don’t think it is the best site, it’s the only site,” she says. “It’s so near the centre of our catchment area. The vast majority of pupils live within half a mile and would be walking or scootering to school.

“You have got all the space around it for the children to use in a whole host of different ways.

“The majority of people in that area would really like to see the school there. There are so many opportunities for the community, not just for our children but cross-generational and cross-gender.

“As part of the school build we will have a multi-use games area and a large hall and we’re going to be renting or hiring that out to the community. It’s a win-win situation.” The playing fields were left to Reading in trust by Charles Hewett in 1938 to be used for recreation, leisure and sport, so opponents argue that it is not a suitable site for a school.

But Mrs Edwards says: “Actually, by having primary age children on a small part of the playing fields — and we’re talking less than five — they will be involved in leisure and recreation every single day.

“The area is hugely under-used. There isn’t a whole host of different activities that people can engage in. We think that by having a school we’re going to open up those opportunities — they are endless.

“I’ve been a PE teacher for 27 years. There’s no way I would promote Mapledurham playing fields as a site if I felt that it would be at the expense of those already there.

At weekends and during school holidays, the school’s facilities could be utilised by community groups.

Mrs Edwards says: “We do understand people’s concerns but there isn’t another viable option and I think that everybody needs to be prepared to compromise for the benefit of all — and we really do see the benefit for all.” The Heights primary currently has 220 pupils and at full capacity would have 350, although not all the children would leave school at the same time each day with about 120 engaged in after-school clubs and activities.

At its current site — the former Caversham Nursery — the school has six classrooms on the first floor for year one, two and three children and three more on the ground floor.

“Life at the Heights is great but it’s very tight, let’s put it that way,” says Mrs Edwards. “We have 224 children on 0.4 of an acre. We have got 150 children going up and down the stairs for every break, lunch and at the end of the day.

“We’re managing for now but the end of this [academic] year we have no more indoor space to put a couple of classes, so if we’re still going to be here, there will need to be another temporary solution.

“As it stands, there is demand and oversubscribed. a nice position to be in but it’s a real shame for those children in the Caversham Heights area who are thinking ‘I can’t go to the local school of my choice’. They need and deserve the right to be educated in a school in their community.”