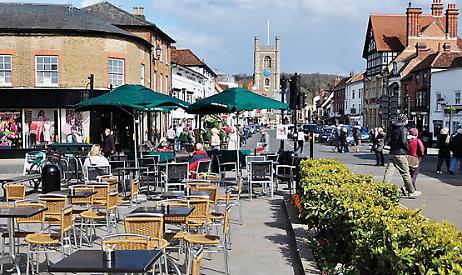 HENLEY’S town manager wants to have greater control over what shops open in the town.

Helen Barnett says there are too many cafés, hairdressers and nail bars and would prefer to see more boutiques and fashion retailers.

She has been working closely with South Oxfordshire District Council, the planning authority, and estate agents to try and ensure Henley attracts a mix of shops.

Ms Barnett, whose role is to support the business community and increase footfall, is also exploring whether the law  can be used to restrict the change of use of retail units.

She said: “We want to try and and limit the amount of hairdressers, nail bars and the like because we want to have solid retail in the town. It’s about working with landlords and agents to try and improve that.

“We want to have more boutiques and fashion stores. We’re a little bit lacking in men’s fashion and teenage fashion and have a very limited children’s offer.

“There are gaps in the market we could help to fill. We want to work for the benefit of the retailers that are already here. We’re trying to help everybody and you do need a balance of national and independent retailers — you can’t just have one or the other.”

Ms Barnett, a marketing expert, has already had some success by working with landlords. In February, women’s fashion boutique East opened in Bell Street which she believed may have become another eaterie.

She explained: “I had a conversation with Simmons & Sons estate agents about what we were looking for in the town and they managed to get East to go into that unit.

“At the end of the day the landlord is going to fill his unit and take a rent, but if I work with them and the agents then hopefully we can get a good result for Henley. It’s about collaboration and working alongside them.”

“It might be that in three weeks’ time a load of cafes leave and we decide we need some more.

“We’re not talking about hundreds of units – it’s going to be a handful of units at any one time.”

Mayor Kellie Hinton said: “I think we do have too many of certain types of outlets in the town centre and it’s not ideal to keep having more.

“I know of two more proposed coffee shops in the town centre coming up. It’s not ideal and it affects the other coffee shops - it’ll be the independents that will suffer and not the chains.

“At the same time we’re limited as to how we can control what comes into the town and it’s up to retailers themselves if they want to come to Henley and whether it’s a viable business option.

“We don’t necessarily need more nail bars and coffee shops but how we can stop that I don’t know, but I hope we can get more variety."

Four of these cannot be occupied – two at the entrance to Market Place Mews needed for the Gardiner Place development, the former Hearn of Henley shoe store in Market Place which is set to be redeveloped and the former Henley Kitchen Studio in Reading Road which is in liquidation.

Of the other 10, five are under offer and three are being actively marketed, said Ms Barnett.

She added: “The vacancy rate is really low for Henley, even though people think it’s high, when you compare it to town’s of a similar size.

“Vacancy rates nationally are around 11 per cent. I think we have got 160 units so to only have that small amount of units available is good.

“It’s quite a good thing to have retail units change hands and bring new blood in.”

Niki Schafer, chairwoman of the Henley Business Partnership, agreed that the town had enough cafes, hairdressers and nail bars.

“I personally do not want to see another nail bar in town,” she said.

“The customer base is only at a certain level, you can’t increase the size of the town.”

But she added: “I don’t think I would be at a stage of changing the legality to stop certain things happening. I would be much more in favour of encouraging the right people, rather than a prevention method, but that’s my personal point of view.

“As a partnership we want to support the retailers of the town, we don’t necessarily dictate what those retailers should be.

“We want to have a great mix of businesses, Henley to be a good place to do business and create an environment where they can support each other.

“If you open a retail outlet in town you have to be part of the community and come in and understand how Henley works. They can’t just think ‘gosh, there’s a lot of wealth here, I’ll be ok’ but understand what we like.

“Obviously, the internet is a enormous competitor and therefore experiential is the future. You can't order a cup of coffee on the internet or get your nails done. You can buy clothes, but you can’t try them on, so if you’re going to sell clothes you’ve got to have great customer service.”

Mrs Schafer said Henley’s vacant retail units were low compared to the national average and praised Ms Barnett for her work in the town.

“The economic development is very important in that all the businesses and retailers do well enough to pay their rents and business rates.