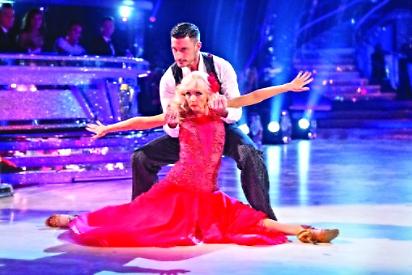 DEBBIE was a surprise hit the first Strictly Come Dancing live show in an energetic performance branded “hot and spicy” by the judges.

The radio presenter and widow of magician Paul Daniels, who lives in Wargrave, impressed the panel with her skirt-swishing Paso Doble, which she ended by planting an impromptu kiss on partner Giovanni Pernice.

The judges awarded her 30 points, putting her second on the leaderboard, just one point behind leaders Aston Merrygold and Janette Marara.

She played a “feisty waitress” dancing to Fergie’s Be Italian in a routine met with a standing ovation from judges Darcey Bussell and Shirley Ballas.

Bussell told her: “You are on fire — oh my! To see a celeb have more choreography in a Paso Doble, the lady to do more than the man, I can see why.

“You’re so flexible — I love it. Keep it up because you’re going to go a long way.”

The 58-year-old is the competition’s oldest contestant but judge Craig Revel Horwood told her: “Whatever Giovanni has done to you it’s certainly working because you’re dancing like a 20-year-old out there.”

“There was a lot of very, very good detail and very well done,” he added. “You’re in good shape aren’t you, my darling?”

Ballas added: “You have got it all, you’re outstanding.”

She was called Debbie “Doble” McGee by newsreader Chris Browning the next morning on her weekly show on BBC Radio Berkshire.

She told listeners: “It was a great night. I’m going to soak all afternoon in my sister’s hot tub because my body is feeling that it was flung around last night. I had the most wonderful time.

“Anyone who watched Strictly will know just how far Giovanni pushed me. It’s very interesting the whole process of learning the steps and then your partner pushes you that bit further to get your legs up higher and do your turns faster and fling your head back and then you’ve got to act the story.

“I just thought ‘yep, I’m going to have a good time, I’ve put in the work, whatever happens, happens’ and it went well.”

She confessed to eating squares of Galaxy chocolate before her performance to give her energy for the routine.

“I was second on the leaderboard in my first week which is amazing,” she added.

But it didn’t all go to plan. After leaving home at about 7.15am on Saturday, she and her partner were the first on the studio floor for a camera rehearsal at 9.20am.

McGee explained: “It went completely wrong, I have to say, the dance. Not the acting but just what I was doing — I dropped my tambourine, which was part of the dance.

“I didn’t fall over but I slipped a bit because the studio floor was so different from what we have been rehearsing with.

A second run proved more successful before she was sent to hair and make-up and was given a by a physiotherapist. After she ran through the whole show at a dress rehearsal.

Before the live show she relaxed in her dressing room by watching a documentary about the racing driver Graham Hill, she said.

McGee admitted the couple’s kiss wasn’t part of the routine they had rehearsed while Pernice, who had lipstick around his mouth as they awaited the judges’ scores, said it had been a “trick”.

She said: “I was just being a performer. It just happened that I grabbed his face and kissed him on the lips and I actually don’t think he’s recovered yet!”

Tomorrow (Saturday) McGee will take to the dance floor again with a new routine. She is competing on the 15th series of the show in tribute to her late husband, who died in March last year, and who appeared in the 2010 series.

McGee will be hoping to fare better in the competition as Daniels and his dance partner Ola Jordan booted out in week two.

Meanwhile, former Strictly professional dancer Ian Waite led a training day for dance instructors at The Henley College. He visited the college as part of the FitSteps exercise programme.

More than 20 people attended the event where they were trained by Waite and Ian Parker before finding out the following week whether they had passed.

They included salsa teacher Jennifer Benavidez, of Shiplake, and Peter te Slaa, who was visiting from Holland.

Waite, a professional dancer originally from Reading, founded FitSteps with fellow Strictly dancer Natalie Lowe and competitor Mark Foster in 2013. The dance is a combination of ballroom and Latin.