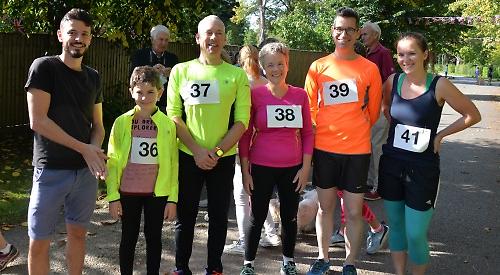 THE winner of the second annual Shiplake Country Run was motivated to win the race after he finished behind a child last year.

Duncan Wild, from Wargrave, took part in the inaugural event last year but finished third and was unhappy after he was beaten into second place by an 11-year-old.

He was cheered and applauded by dozens of spectators as he finished the 5km course in 21 minutes and 39 seconds.

Mr Wild, 47, was using the race as preparation for a triathlon in Barcelona this weekend.

He said: “I finished third in last year’s event and I was beaten by an 11-year-old so I wanted to make sure I was not beaten by someone younger me this year. I do and I have a race in Barcelona next weekend. This was a lovely run, a good course with a bit of everything and it gives you a chance to see the village and run by the river. I was very happy with my time, which was quite fast for me.”

Mr Wild was unable to beat the course record, which was set by George Hailstone, of Station Road, at last year’s event. He finished in 15 minutes and 48 seconds.

Thirty-one people took part in the event on Sunday. The course was redesigned this year to make it slightly longer. The race started on New Road, Mill Lane and then through Shiplake College Church Lane.

They then went down the Thames towpath up to Shiplake lock a dirt track and up Crowsley Road before turning into New Road for the finish.

The course passed through 10 gates and included roads, tracks and footpaths.  Organisers posted 13 marshals around the course to help with the route and other volunteers did administration and gave out free coffee, tea and cakes.

Spectators were also able to enjoy music by parish councillor chairman Tudor Taylor and fellow guitarist Gareth Evans. Cllr Taylor also gave out prizes to Mr Wild and Zaya Carter, of Blandy Road, Henley, who was the fastest woman. Mrs Carter, who finished in 25 minutes and 36 seconds, decided to take part with her daughter Skye, 15, as she wanted to help her get into the sport.

She said: “I said to her we should do it together. When we signed up I was actually dreading it because it was going to be hard.

“I’m very pleased with my result, I was just happy to finish the course and didn’t want to stop running and start walking.

“I’ve just started preparing to run Frieth Hilly in October. This has been good training for that because it’s a really tough race. It’s trail running, which I like to do because they are nice areas to race in.”

The event, which provided a medal to everyone who took part, was organised by villagers Ray Wild and Micky Denehy, who both live in New Road. It was free to enter but there was a bucket for donations which will be used to cover the costs of the event.

Mr Wild said: “The event went very well. The weather was kind to us, everyone enjoyed themselves and nobody got lost on the new route.

“Last year was the first year and we had some difficulty measuring the route. We got it wrong and it was a bit short so we had to find more distance so now it’s 5.2km.”

Councillor Taylor added: “We’ve been trying very hard to integrate the community in a different way. Something like this helps to get different generations involved.

“That’s an important thing because when people are retired they do have more time to get involved but with younger and working people it’s far more difficult to bring them into the community.

“Racers, supporters and their families all come along and there is music played by local musicians, it’s as a local community should be.”

⚫ To see more pictures from the event and to order copies, visit Shiplake Country Run - 2017