Rower has moped stolen while training and finds it in river 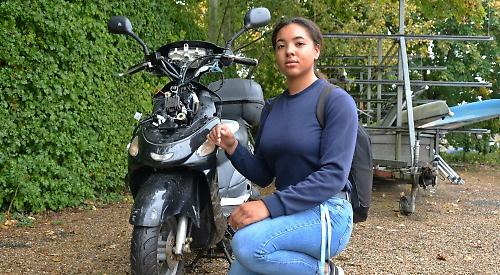 A YOUNG Henley rower’s moped was stolen then dumped in the River Thames.

Mary Wright bought the black Scout 50cc bike new for £900 last year to commute from her lodgings in Lower Assendon to training sessions at Henley Rowing Club, where she is a member of the junior squad.

The 17-year-old, who moved to the area from Birmingham last year and rents a room from villagers Simon Barnett and Juliet Machan, studies A-level biology, geography and psychology at The Henley College so she also used the vehicle to get to classes.

But on Monday last week, about an hour after she had visited the club’s headquarters off Wargrave Road for a training session, she went outside to find it floating just off the pontoon on the riverbank. The thief had ripped off plastic body panels to access the wiring and bypass the ignition lock before driving it to the water’s edge.

It is believed that they tried to make off with it in a belonging to a resident of Rod Eyot Island, which is immediately but dumped it after failing to start the vessel, which was moored at a neighbouring jetty.

The front of the moped, which weighs about 80kg, was still sticking out of the water so Mary and two older club members tied a rope around the handlebars then hauled it out.

The engine and exhaust system were waterlogged and this can only be fixed by disassembling the bike and clearing or replacing each part, which would cost far more than the vehicle’s value.

Miss Wright only had third-party insurance so cannot claim for a replacement and is now commuting to training and college by bicycle instead.

The teenager, who previously rowed for Burton Leander Rowing Club in Staffordshire, came to Henley to further her rowing career.

She represented Henley Rowing Club at this year’s Junior World Championships, where she won the B final as a part of a composite four that placed seventh overall, as well as the Henley Women’s and the National Schools regattas.

She said: “I drove to the club that morning then walked to college and the bike was still there when I walked back at lunchtime. I’d been in the club for a while doing warm-ups for training when a woman came in asking if we’d seen anything suspicious because there was a moped floating in the water.

“I went out hoping it wasn’t mine, but unfortunately it was. My first thought wasn’t sadness or anger but confusion – I wondered why on earth anyone would do it.

“The police didn’t say much but they seemed to think it was linked to the attempted boat theft. Maybe they tried to take it away on the boat but dumped it in the water because they couldn’t.”

She added: “I’ve called a couple of garages but I don’t think it’s going to be fixable because it’s pretty badly damaged. I’m a bit upset but I’ve got a bicycle and I’ll just have to get by with that.”