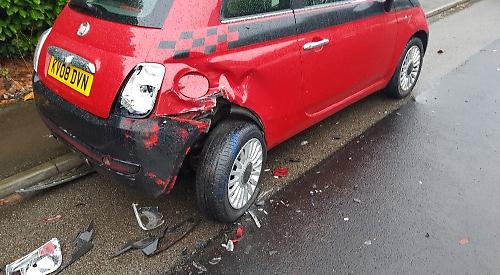 A TEENAGER’S dream of owning her own car was wrecked by a hit and run driver who smashed into it.

Emily Pitcher had not even been behind the wheel of the Fiat 500 before it was badly damaged while parked in Harpsden Road, Henley, just hours after her parents bought it.

The young male driver fled without leaving any of his details following the smash in the early hours of Sunday.

Emily, a 17-year-old apprentice hairdresser, only passed her driving test last week and had put £2,150 of her savings towards the car.

Her parents, Helen and Leighton, who contributed the rest, including insurance cover, bought the red hatchback on Saturday from a seller in Aylesbury and drove it home.

They parked the car near their home in Newtown Gardens ready to surprise their daughter, who was staying at her boyfriend’s house, the next day.

Instead, they got up on Sunday to be told what had happened by a friend and some neighbours who had heard the crash and seen the driver.

Mrs Pitcher, 41, an assistant accountant, said: “Both of us were really ecstatic and couldn’t wait to see Emily’s face the following day — it was going to be a big surprise and such a good day.

“We had told her we couldn’t afford to a car for her and we’d have to look at getting her a clapped-out banger!”

The couple checked on the Fiat at about midnight before going to bed but were woken up on Sunday morning by a phone call from Nigel Rainbow, landlord of the Three Horseshoes pub nearby.

Mrs Pitcher said: “He said ‘have you seen your new car?’ and we said ‘no’ and he said ‘it has been badly smashed — there’s debris all over the road.’ At that point we were just waking up, thinking ‘this is going to be really cool today’, which then turned to complete devastation. Both of us were outside in tears and we phoned the police.

“We checked the car to see if there were any notes on it and there was nothing. We couldn’t believe the damage that had been done and that no other car had been touched. We had to pick debris up off the road and the car was actually knocked up the kerb — that’s how hard it had been hit.

“A lady who lives down the road heard the bang at 1.30am, looked out of her window and saw a blue car horizontally across the road and a young lad get out. He looked at the damage, got back in and then spent a good five minutes or so turning around and then going up the road towards Harpsden.”

Mr Pitcher, 42, a mechanic and fitter at Fix Auto in Henley, said he would inspect the car to see if it could be repaired.

He said: “Initially I thought it would be a damaged wing mirror. To go out there and see it… gutted is an understatement.”

The couple called their daughter to tell her the news. Emily said: “My dad said to me, ‘you know how we didn’t get you a car? Well, I’ve some terrible news to tell you. We did get you a car, it has possibly been written off overnight’.

“I didn’t believe it to start with, I thought they were having me on. I wanted to scream and I started crying. When I saw the car I ran to it and kind of hugged it a little bit and cried. I felt like someone had ripped my heart out.

“I’m really angry, shocked and devastated. I’ve actually cried myself to sleep most nights since because it’s horrible to not be able to wake up to think ‘I have my dream car’.”

Emily, who works at Hair and Beauty Salon in Sonning Common, added: “I’d been saving my money pretty much since I was born so I could get a car when I was older. I saw this car on eBay and I’d fallen in love with it.”

Mrs Pitcher called the driver “cowardly”. She said: “They are just covering their own backsides, they are not concerned with anyone else’s feelings. Ideally, we would like them to come forward because it’s the best thing for everyone. We cannot afford to replace this car or pay to have it fixed and technically the person who did it should be paying for it, not us.

“This could cause our daughter’s insurance to rocket through no fault of her own and she didn’t even know she had the car or get a chance to drive it.”

The couple the other vehicle was a small, blue metallic car, possibly a Peugeot 107 or Citroen C1. The driver was tall, of a slim build and wearing a light-coloured baseball cap.

The family are now trying to raise £3,000 via the website www.justgiving.com to help Emily have the car repaired or to buy a runaround.

Anyone with information should call Thames Valley Police on 101 and quote reference number 439011017.