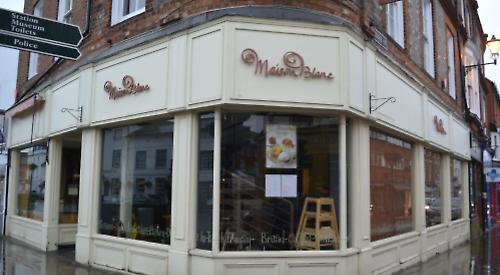 TWO more coffee shops are set to open in Henley, bringing the town’s total number to 13.

Scene One Take One is to open at the former Flower Shop premises in Bell Street and a national coffee shop chain is interested in taking over the former Maison Blanc premises on the corner of Duke Street and Hart Street, which closed in March.

It comes just a week after town manager Helen Barnett said the town had too many cafes, nail bars and hairdressers and that she wanted to have more control over new business openings.

Sebnem Bamsey, 37, from Henley, has taken a four-and-a-half year lease on the Bell Street premises and is set to open in seven to 10 days’ time.

The former singer and actress said: “I’m really excited. I’ve always said I’d like to have a coffee shop or restaurant.

“I’m hoping it will be a nice place to be and it’s going to be slightly different from what’s already in Henley. The reason there are a lot of coffee shops here is because people want to go in and check them out. If they weren’t successful there wouldn’t be so many.”

Mrs Bamsey has drawn inspiration from her career for the interior of the shop.

She said: “It’s quite a small shop but I’ve tried to do the best I can with the space to create a nice atmosphere for people. I want it to be a fun place and really want to create a little community there.

“I have a background in singing and acting so the concept will be to do with film and music. It is kind of a new chapter and that’s why I’m calling it Scene One Take One. There will posters of classic and modern films and a guitar on the wall.”

Mrs Bamsey, who joined the Henley Players after moving to the town a year ago, said it had taken four months to transform the shop.

“It’s like a little miracle what we have done in there,” she said. “I’ve had a lot of locals popping their heads in. They said they needed something at that end of town so they are quite keen.”

The Henley Standard understands that the former Maison Blanc premises is under offer from a “funky” coffee chain.

Ms Barnett said she would like the unit re-occupied as soon as possible.

“It’s so visible and right in the centre of the town,” she said. “It’s better to have a unit occupied as it creates more competition but we don’t want to cannibalise the market that we have to make it impossible for the retailers that are coffee shops.

“However, we have no control over how the landlords want to let a unit. We need a variety of retail outlets and we have that opportunity with some of the other units which we can help to influence.”

The existing coffee shops are Spoon and Costa in Duke Street, Caffè Nero and Café Buendia in Bell Street, Hot Gossip in Friday Street, Starbucks, Patisserie Valerie and Café Copia in Market Place, the Chocolate Cafe in Thames Side, the Smiley Café inside M&Co in Bell Street and Leafi at the River & Rowing Museum.

Meanwhile, the former home of Jonkers book shop in Hart Street is also set to become a food business and is currently under offer.

The Salon of Chi is set to move into the former Nepalese restaurant in Reading Road from its current premise near Tesco and the former No 27 unit in Duke Street is expected to become a boutique.

Mayor Kellie Hinton said: “I do think there are certain types of establishments that we do have too much of in Henley but those businesses choose to come to the town and we can’t pick and choose.

“We have too many coffee shops and we should be focusing on our independent ones, not chains.

“Do I think that’s great for the long-term economy of the town? No, it’s probably not, but it’s better to have a coffee shop rather than an empty shop.

“It would be nice to have more variety of retail outlets. We should be attracting families into Henley and providi