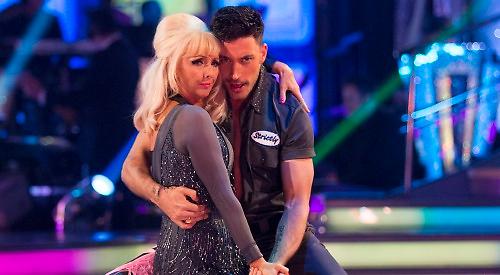 DEBBIE McGEE was likened to a Barbie doll and told to be more “natural” after her latest performance on Strictly Come Dancing.

The radio presenter from Wargrave was criticised for having straight legs during her Cha cha cha routine with professional dance partner Giovanni Pernice.

But she also delighted the judges with a standing splits, prompting Bruno Tonioli to describe her as being “very, very, very bendy”.

The routine began with her sitting behind an office desk, then Pernice appeared dressed as a deliveryman and carrying a large box, which he put down on the desk.

As he walked into the “office”, she looked him up and down before throwing off her spectacles, walking round the desk and grabbing him by his shirt and pulling him towards her.

The routine ended with McGee opening the box to find it contained two love heart balloons, one of which she hugged

The pair were awarded 27 points out of 40 by the judges — their worst score so far after four weeks of
competition and leaving them seventh on the leaderboard.

As the couple walked off the dance floor, co-host Tess Daly told the 58-year-old: “Incredible — you are so flexible. You, standing splits — amazing.”

Judge Shirley Ballas said McGee looked “stunning” in her floaty, sparkly dress and that she was “envious” of her for having Pernice as her delivery man.

But then she criticised McGee’s footwork for being “too balletic”.

She said: “You are such a lady when you dance. I would like to see a little bit more of an earthy kind of approach. A little bit more down with the weight, one straight leg, one bent leg.

“It’s a little bit on two straight legs so it can make you look just a tad stilted... but a very good, very good attempt.”

Tonioli said he loved the routine and gave the pair a score of eight, the highest out of all four judges.

“For me I have no worries,” he said. “Debbie always delivers. On time, exact, efficient and very, very, very bendy. Your leg kept going up and up and up and up... when is it going to end? You are very precise, you are so dainty, I love all this clipped movement. There is no faffing about with the free hand. Hit that beat, get it done and get it clean. Well done. my darling.”

He said: “I felt you looked like a bit of a Barbie doll doing this particular dance actually because it was just a little bit stiff.

“The legs were a little bit too straight at times and you also had a bent knee when you were moving forward on your New York [step] and that should be a straight leg.

“But you did prove in that dance that you are very loose of limb, darling, and supple and I love that. Brilliant.” Darcey Bussell said McGee’s movements needed to be more natural.

She said: “Your intent and your focus is excellent and we have seen that every time you come out. You are here to dance and show off your facility and you do have it.

“There were moments, the guys are right, there was too much of a straight leg. The arm also became very over-extended and stiff, so if you can loosen that up.

“I think you get premeditated in some of your poses. They look too posed and calculated. Try to relax a bit and be more natural.

“I love what you do, especially that unfolding of that leg... oh my gosh, it was fabulous.”

Co-host Claudia Winkleman told the couple that the judges were starting to get tougher on all the dancers. Week four they do suddenly get quite pernickety,” she said.

““There’s no warning and they suddenly go this and that. Did you understand their comments and take it on board?”

McGee replied: “It’s what’s he’s [Pernice] been telling me all week. That’s okay, I’ll have to work on it.”

Speaking on her BBC Radio Berkshire show on Sunday, Mc Gee said: “Yes, I had another fabulous night on Strictly last night apart from the fact that Giovanni and I were dancing first, which really, really, really makes a difference.

“It’s so hard because usually while the others are dancing you can warm yourself up a bit, go over your dance, really get it in your head. It was my toughest dance. It didn’t look it but it really was and on Monday and Tuesday I really struggled to pick it up.

“The way the pros do the Cha cha cha is you go on beat two, for anyone who dances, but your body naturally wants to go on one. You have got to count the whole time.”

Charlotte Hawkins, newsreader on ITV’s Good Morning Britain, became the third celebrity to leave the show after losing out to EastEnders actor Davood Ghadami and Nadiya Bychkova in the dance-off.

Singer Alexandra Burke, who performed at the Henley Festival in 2011, topped the leaderboard with her dance partner Gorka Marquez with 39 points with their jive.