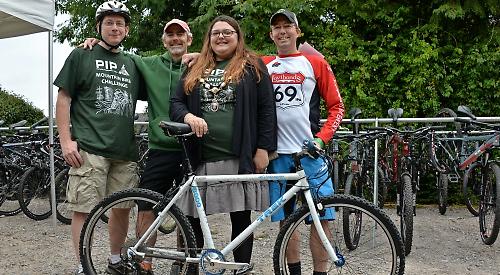 EIGHTY cyclists from across the South took part in a charity ride around the Henley area on Saturday.

The event raised at least £26,500 for Pursuing Independent Paths, a charity that supports adults with learning disabilities, and it’s hoped that the final total will match the £49,000 raised last year.

Riders assembled at the brewery an hour before departure and enjoyed refreshments, including a selection of Lovibonds beers.

They were then released in waves following a briefing and marshalled around the course by 120 volunteers, including Henley Mayor Kellie Hinton.

When they returned they enjoyed food provided by the Bosley Patch market garden, based at Swiss Farm, and Henley butchers Gabriel Machin.

The riders could also receive massages from staff at the Treatment Rooms, which is based at the Red Lion Hotel, in exchange for a donation to the London-based charity. The participants included Henley town councillor Glen Lambert who raised £710 in sponsorship.

He hired his bicycle from Henley Cycles in Reading Road but it was the first time he had ridden a mountain bike.

Mr Lambert, who lives in Greys Road, Henley, said: “I’d been going to the event for several years just to enjoy the food and entertainment at the end and decided it was about time I took part in the actual ride.

“I did pretty well and the weather conditions were favourable, although there was one moment where I skidded through mud at the bottom of a hill and landed in a nettle patch! I also had to fix a puncture about a quarter of the way around but it didn’t pose too much of a problem.

“I’d done a few short practice runs but it was really a whole new thing for me and I’m very grateful for Henley Cycles’ support.

“I certainly felt fitter at the end and might have to take up cycling regularly.”

Jeff Rosenmeier, the owner of Lovibonds, rode alongside his wife Eithne.

He has supported the event from the outset as he is a friend of Mr Feeney and is one of seven people to have taken part every year.

Mr Rosenmeier said: “It was another great year with a wonderful turnout. It’s not really a race for me because I’m always stopping to help people with punctures and other repairs but I really enjoyed it.

“There’s always a great community feel, which I think is why it’s becoming more and more popular.”

Organiser Bill Feeney, who lives in Queen Street, Henley, and is director of Pursuing Independent Paths, said: “It was a fantastic day. The conditions were just perfect and the people who took part say it really highlighted the beauty and accessibility of the countryside.

“We had quite a few local riders as well as corporate participants coming up from London. Every year we attract more riders so it’s becoming popular. We’re really proud to be working with local businesses and giving them a chance to showcase their products and services.”

Badgemore Primary School in Hop Gardens, where Mr Feeney is a governor and his daughter Poppy, eight, is a pupil, ran a partner event on Thursday last week.

Pupils rode laps of the playground on bikes and scooters until they had completed 20 miles between them.

Headteacher Marion Arnold said: “It was a fantastic, fun afternoon and the children really enjoyed speeding around the course on their bikes, scooters and roller blades.”