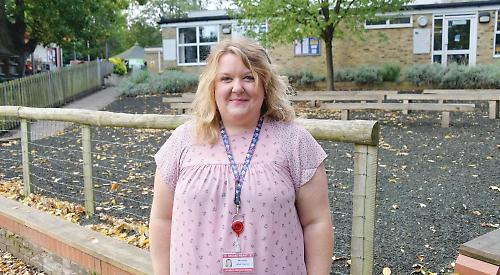 THE new headteacher of Sacred Heart Primary in Henley wants it to achieve the top rating from education watchdog Ofsted.

Rachel Gavin has stepped up from head to succeed Gez Davis, who left at the end of term after more than three years.

She has spent all but two of her 20 years in teaching at the Greys Hill school, beginning as reception class teacher in 1999.

Over the years she has been responsible for religious education, English, music and special educational needs as well as being deputy head for the last 10 years.

The school was rated “good” following an Ofsted inspection in October last year, having received a “requires improvement” rating in 2014.

Mrs Gavin, 42, from Wallingford, said: “This is a very exciting opportunity which is going to have its challenges but ones I’m fully prepared for.

“What we think about Sacred Heart internally is that it’s an outstanding school and we want to show that at our next Ofsted inspection. Sacred Heart school is already an absolutely wonderful school. I have the advantage of knowing the school, the teachers, the parents and the children inside out, so have a very clear idea of what we need to do to get better.

“My greatest challenge is to prove that to the community and make Sacred Heart choice for more parents. Because we’re a Catholic school, it is very high in the priorities that we become demonstrably active in the community.

“One of our big plans is for each class to have a project that will help the community at large.

“Part of the Catholic ethos is to have care and concern for others and we can start that locally.”

Mrs Gavin, who has two sons, Charlie, 12, and Felix, seven, said she wanted to maintain the school’s high standards and to broaden the curriculum to make it more “exciting and challenging” for pupils.

She said: “Our results are impressive, whether judged by progress or outcomes, and we have a firm focus on educating the whole child.

“It’s more developing what we have got. We’re already quite well known for being a musical and sporty school. We’ll have, for example, artist in residence weeks.”

Mrs Gavin had no hesitation about applying for the job of headteacher with her experience.

She said: “I wanted to be a teacher from when I was 12 years old and feel extremely privileged to have followed my dream.

“I did not have a career plan in mind when I joined Sacred Heart but it was then, as it is now, a very happy, very special school within the heart of the community.

“However, after working for eight different headteachers during my time at Sacred Heart, I felt the time was right. I had often joked that once the time came when a child of a child I had taught started school that would be the sign to move on.

“Coincidentally, that has happened this year with a little girl starting in reception whose mother I taught when she was in reception!”

She said: “Although I might be the first person everyone meets, it’s the team that’s important, particularly the teachers — they are the ones that really make a difference in the school.

“Teaching is a vocation and a very demanding role. It is also, I believe, the greatest job in the world.

“I will miss being a class teacher but plan to keep myself firmly rooted as an educator with the needs of the children always being the priority.”

Mr Davis, who was praised for his “energetic and inspirational leadership” by Ofsted, has taken up a headteacher’s post nearer his home in Iver, Buckinghamshire.