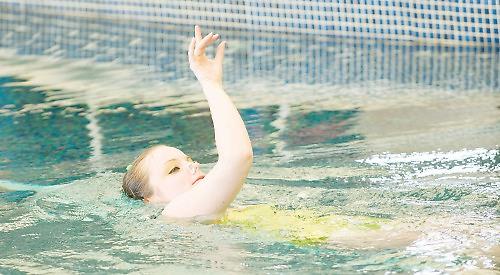 A PERFORMANCE by synchronised swimmers can be so mesmerising that you could be forgiven for failing to notice their intricate costumes.

Yet Mikki Carter spends almost as many hours designing and creating the swimsuits as the athletes do in training. Often she has to sew hundreds of sequins on to her creations by hand.

A former synchronised swimmer and coach herself, she made two of the designs worn by a Great Britain duo when they competed at the Rio Olympics last year.

Mrs Carter, 27, of Peppard Road, Sonning Common, set up her business Selkie Swimwear, the only one of its kind in the UK, three years ago.

She had spent about 15 years competing in the sport and 10 as a coach and now has responsibility for the under-12 sections at Henley Synchro Club, where her mother Karen Bennett is the head coach.

The club, which meets at the Henley leisure centre pool, was founded in the Seventies by her grandmother Joan Bennett.

As a child, she would spend hours watching her mother coach.

She recalls: “My mum was born in Boston and moved to Canada aged two or three and started swimming. Synchro was huge in Canada at the time, the equivalent of rowing here.

“She moved back to the UK aged 10 and started swimming in Reading as well as Henley. She went straight away back into coaching when she had me. I was in some sort of rubber dinghy in the pool. I would just be in the water — I could probably swim before I could walk and definitely before I could run!

“I started synchro when I was about five and competed when I was eight. It’s just what I did and I didn’t see that it was different. It went from there.”

Mrs Carter, who attended Sonning Common Primary and Chiltern Edge School, says it was a big commitment to become a synchronised swimmer because there are so many aspects to the sport.

She explains: “You don’t just do your routine, you do flexibility work, gymnastics, diving and speed swimming. There’s a lot of training to put into that three-minute routine.

“You learn to work as a team but also to be creative and work as an individual and to be dedicated and committed. It is a pretty quirky sport but a lot of people don’t appreciate how hard it is.”

She joined the Reading Royals when she was eight and stayed until she was 12 by which time she was training three to four hours a week. She competed in two national championships.

When she was 15 she spent a year with the Berks and South Bucks squad and she represented Henley Synchro in the national championships at under-20 level when she was 18. She began coaching at 16 and started making costumes at about the same time.

She recalls: “As a kid I would attach sequins to my costumes. I can remember when I was little doing the head dresses with my mum for competitions. I was probably about 10 when I started helping her with the club’s costumes.

“You always had to be sparkly and when you get to a competition and see someone with more sparkles you think, ‘I need to do that next time’.

“The only rule in synchro is it has to be a one-piece and there can be nothing offensive on it. You can go anywhere with it — and my designs do!”

One costume can take anywhere between three and 30 hours to make.

Mrs Carter says: “Thirty hours is what you would expect to see on the national stage at the Olympics and the hours in that is mainly the hand-sewn sequins because they are all over the place. There’s not a part of the costume that doesn’t get covered.

“If I’m doing these 30-hour ones quite often I’ll ask my mum to help me. I like to break it up — a day of cutting up the fabric, a day of sewing, a day of doing all the elastic. The sequins I will tend to do sitting watching TV until 10pm.”

She begins by researching and designing the swimsuit before making the pattern to enable her to cut out the fabric in the sizes she needs. She then sews the appliqués before sewing the front to the back and putting the elastic around the edges. Finally, the sequins are added.

As soon as she started her company, orders came in.

Mrs Carter explains: “Because I did the sport I know what’s comfortable, I know what swimmers are worried about when they are swimming. The word spread and because I was coaching at that level of swimmer anyway, the business came in quite quickly. I’m the only one who does this specifically for synchronised swimming.

“The majority of my orders are for national age groups — for 11- to 15-year-olds — that are trying to get into the GB squad.”

Mrs Carter, who married former GB gymnast Jaime Carter, 26, in July, was given the job of designing the costumes for Team GB duo Olivia Federici and Katie Clark after contacting their coach Katie Dawkins in June 2016.

She recalled: “I just texted her and said ‘do you need any costumes?’ and she said ‘yes, please!’ She sent me the music and the girls came round to be measured. They had some ideas and I had some ideas and we put them together into one costume.

“The theme was Singin’ in the Rain. They wanted it to look like an umbrella and a yellow rain mac.

“I wanted it to be really special for them because everything they did was self-funded. UK synchro went from having £8,000-a-year between about 10 athletes to nothing and it was devastating to some of the girls and not really the Olympic legacy everyone was hoping for.”

Mrs Carter watched the pair in training at Aldershot Garrison to see how her swimsuits fitted them.

“After we had tweaked them, it was probably about 50 hours’ work for each one and I gave them to them the week before they flew out to Brazil,” she says. “Of course I watched the synchro on TV. It was a huge moment and I was really, really proud and pleased and for them too because I knew them. I knew how hard they had worked to be part of that squad.”

Mrs Carter says that synchro used to be at the bottom of the sporting pile until the Olympics in 2012.

“I don’t think it had the press and media behind them before London,” she explains. “That did so much for the sport — all the clubs in the country had a massive increase in swimmers that year.

“We had 20 new swimmers and almost doubled our membership. It was probably then that we started competing and not just being just a fun club. Parents were seeing it more as a sport, not as a hobby.”

As to her own future, Mrs Carter is hopeful after her success to date, saying: “I didn’t expect to have as much business coming through as quickly as it did.”