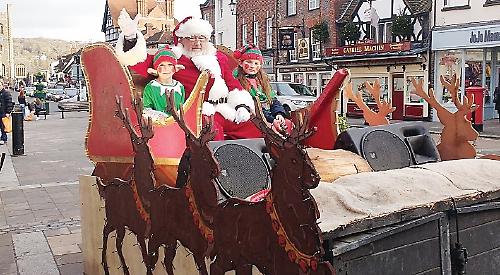 A FORMER Mayor of Henley hopes to save the town’s Santa sleigh run.

Pam Phillips needs volunteer “elves” to help run the float during the week-long event in December and retain “the magic of Christmas” for the town’s children.

Her appeal comes after Henley Round Table, which had organised the sleigh for decades, folded due to falling membership.

The Swiss Farm bonfire and fireworks display, which the club also organised, will not now take place.

Mrs Phillips hopes to raise money for Henley Lions Club’s charities so collectors accompanying the sleigh can rattle buckets in the street.

Mrs Phillips, of St Mark’s Road, said her reasons for saving the sleigh were personal.

“My own children, who are now in their late thirties and early forties, say it was one of the thing they loved about Christmas in Henley,” she said.

“Last year I saw it through the eyes of my six-year-old grandson Rhys and I think it would be such a shame for this tradition to be lost to Henley.

“I’m prepared to put in the effort to help reclaim the magic of Christmas for the small children of the town.

“I have spoken to some former members of Round Table and the sleigh is being stored by Wilkins in Reading.

“I understand that other towns were after it but have been assured that if I can make this happen then the sleigh will stay in Henley.”

Mrs Phillips, who founded the Santa fun run in 2011 when she was mayor, plans to run the sleigh event every night of the second week of December. It will visit different parts of Henley as well as Shiplake each night from 6pm to 8pm.

She said she had three volunteers for the role of Father Christmas but needed about eight “elves” to help each evening.

Their role would involve knocking on doors to invite children outside and carrying the collection buckets. Volunteers can help for as many evenings as they wish. Some former Round Table members have already said they will help out.

Mrs Phillips said: “I want people who are happy to help. We want to knock on as many doors as possible.”

The proceeds will go towards the annual Christmas party for children from Bishopswood School in Sonning Common, which is held at Phyllis Court Club in Henley. Any money left over will go to local charities. If you would like to volunteer, call Mrs Phillips on 07970 130146 or email her at pamelaann
phillips@yahoo.co.uk

This year’s Santa fun run will take place on December 10, the same day as a festive family Sunday in the town centre.

The town’s seasonal events will start on Friday, December 1 with the traditional Christmas festival and late-night shopping event featuring a children’s parade, funfair rides, food stalls and entertainment as well as the switching on of the lights of the giant Christmas tree in Market Place.

The ninth annual Henley Living Advent Calendar will take place at various venues every evening from December 1 to Christmas Eve.