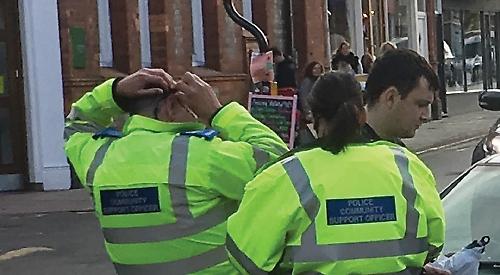 A MAN has been banned from driving for three years after crashing his car in Henley town centre, causing traffic jams.

James Ofiera, 28, admitted dangerous driving after travelling on the wrong side of the road and hitting the kerb before colliding with another car.

He also pleaded guilty to failing to provide a specimen for analysis and was ordered to complete 100 hours of unpaid community work when he appeared at Oxford Magistrates’ Court on Friday.

Ofiera, of Benares Road, Plumstead, Greenwich, was said to have suffered mental health issues since he was involved in another car crash almost four years ago.

The court heard that the latest incident happened at about 1pm on Saturday, October 21.

Ofiera, whose mother Jane Thatcher lives in Henley, was driving along Reading Road towards the town centre in his Citroën Saxo when he was held up in a queue of vehicles at the traffic lights at the Greys Road/Friday Street junction.

When the lights turned green and a car in front of him didn’t move, he overtook by driving on the wrong side of the road.

He clipped the kerb outside Lloyds Bank before swerving back into the road and hitting a BMW.

His car was left partially blocking the junction due to a buckled wheel and punctured tyre on the front passenger side of the car. As queues of traffic built up at the junction, passers-by tried in vain to push the car out of the road.

Police arrived shortly afterwards and arrested Ofiera as he attempted to leave the scene.

Robin Morgan, prosecuting, read to the magistrates from a statement made by Louise Shaw, who was walking along Reading Road at the time of the crash.

He said: “She has given evidence saying she heard a vehicle approaching and sounding like it was going at speed. She turned around and saw what transpired to be the defendant's vehicle. He was driving at speed and at times on the wrong side of the road towards traffic.

“At one point the vehicle mounted the path outside Lloyds Bank before swerving back into the middle of the road. The vehicle then leaves Miss Shaw’s sight and very shortly afterwards she hears a loud bang. She notices the vehicle has collided and sees the defendant exiting the vehicle.

“The defendant was seemingly walking away from the scene before he was ushered back. Miss Shaw had the foresight to switch off the ignition on the car and place the hazard lights on.”

Ofiera was arrested by Pc Carl Churchill. Mr Morgan said: “As a result of the defendant’s behaviour being unpredictable and unusual and his speech being slow and repetitive, he was required to provide a sample of breath.

“This was also required as he had been involved in a road traffic collision but he failed to provide a roadside sample.

“When he was transported to custody, a breath test was attempted. He failed to comply with the breath test and was subsequently charged with failing to provide a specimen for analysis.”

Paul Tibble, defending, said Ofiera was waiting at the traffic lights when they turned green.

He said: “He overtook the traffic and goes on the wrong side of the traffic. A car comes towards him so he moves to avoid the oncoming traffic, clip the kerb and the accident occurs.

“He was not driving recklessly or at high speed, although he does accept the driving was dangerous.”

Mr Tibble said Ofiera had suffered mental health problems since the previous crash, which happened when his stationary car was hit by another car which had just been struck by a third car.

“It has caused him health issues,” he said. “He has been to the doctor and Mr Ofiera believes he is suffering with post traumatic stress disorder.

“He has received some counseling and is currently on medication to help him sleep. Mr Ofiera is determined to get the help he needs. More help could assist him and he wants that assistance. Perhaps it could help him to get a grip with his issues and it would avoid him coming before the court.

“Up to three-and-a-half years ago he was in work but it has been difficult since then.”

“You are required to carry out unpaid work in the community for 100 hours, carried out as instructed by the responsible officer,” she said.

“It must be completed within one year. You must also carry out up to 15 days of rehabilitation activity.

“For the offence of failing to provide a breath specimen you are disqualified from driving for three years as this is the second time you have committed the offence within 10 years.”

Ofiera also admitted causing criminal damage to a fence in a back garden in Vicarage Road, Henley, on June 16.

He was ordered to pay £100 compensation to both Steven Clarke, whose back door glass was smashed, and Catherine Patterson.

Charges of assault and criminal damage were dropped. These related to an incident at his mother’s home in Greys Road on September 13 when it was alleged he threw a television remote control.

Mrs Thatcher failed to attend court to give evidence.