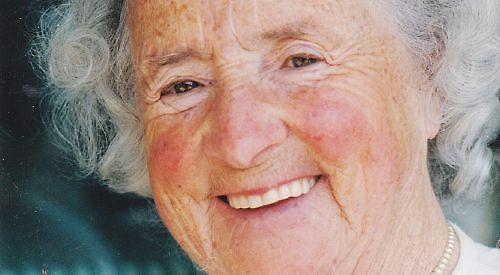 She was by far the longest-lived person ever born in Northern Ireland and was the fourth oldest person in the United Kingdom. She had reached the remarkable age of 111 years and 197 days!

She was born in Belfast on April 17, 1906, the same month as Lou Costello and Samuel Beckett.

Edward VII was King, Sir Henry Campbell-Bannerman was prime minister (with David Lloyd George and Winston Churchill in his cabinet) and Theodore Roosevelt was president of the United States.

It was also the year that the Suffragettes disrupted the state opening of Parliament, E Nesbit’s The Railway Children was first published, the Wright Brothers patented an aeroplane and the San Francisco earthquake happened.

Many of her family worked for Harland and Wolff, who built the ill-fated RMS Titanic. Just think, in her 111 years she survived the Spanish flu pandemic of 1918, two world wars and the Great Depression of the Twenties and Thirties. She was around when Ford’s first Model T was built and lived to see men walking on the moon, women win the vote and the electronic revolution.

There were five monarchs and 22 UK prime ministers in her lifetime.

Jean met her husband Walter when he was on a cycling tour of Northern Ireland and moved to his home town of Aberdeen and then to Dundee.

In the mid-Thirties they moved to London to find work. Maureen (Cleary), her only child, was born in the capital.

Jean worked in Belfast’s famous linen mills as well as looking after her siblings when her parents died quite young.

In Dundee she worked in the jute factories, then in London, the canteens at Smith’s Industries and at Willesden Borough Council.

She and Walter toured the UK (mainly Scotland) and the Continent on his Panther motorbike and sidecar.

After Walter died in 1973, Jean lived on her own in Ramsgate but had many visits from family and friends whom she looked after royally, doing all her own cooking and cleaning.

Then, at the age of 98, she came to live with Maureen and her husband Jim in Mill End and was with them until she was 108.

Then she was excellently looked after at Acacia Lodge.

She was always in remarkable shape for someone of her age. She was extremely proud of the birthday cards she got from the Queen — eight in all!

She attributed her long life and good health to hard work and told anyone who asked how hard it was, particularly as a young girl in Belfast.

Jean enjoyed playing the piano (by ear) when she was younger and sang all the old tunes and carols without much prompting.

A memorial service will be held at St Mary the Virgin Church in Hambleden on Wednesday. November 15 at 12.30pm.