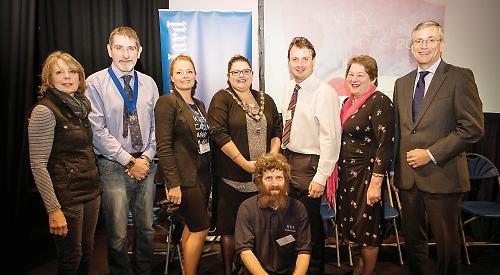 More than 100 guests packed into the New Street venue where the charity fund-raiser will return next month after a two-year absence.

Richard Rodway, who chairs the calendar, said: “It was great to see so many people involved in making this event what it is. Hopefully, that’s a barometer of their enthusiasm and how well received our event is.

“It’s also great to be back at the Kenton after two years — Christmas wouldn’t be Christmas without coming here.”

The event involves 24 half-hour performances by singers, dancers and other acts at 6.15pm each evening from December 1 to Christmas Eve.

All but the final night will have a dedicated charity, which will be able to publicise its work and hold a bucket collection.

The proceeds from the Christmas Eve performance will go to Henley Mayor Kellie Hinton’s chosen good causes for her year in office. Mr Rodway, a partner at the Head Partnership solicitors in Henley, said the performers would include different choirs, actors, dance groups and troupes, bands and musicians.

“We have leaned more towards tried and tested favourites rather than new acts,” he added.

Rick White, chairman of the Kenton’s board of trustees, said: “The Kenton has a long tradition of supporting local, community events and I’m delighted we’re partnering with our friends in hosting the launch of the Living Advent Calendar.”