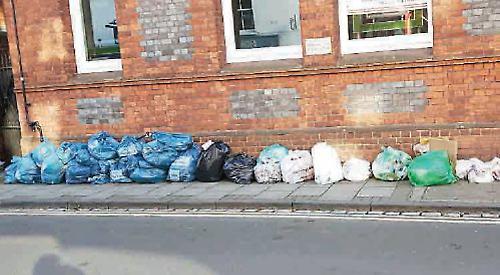 BUSINESSES in Henley could be fined if they don’t put their waste out for collection at a designated time.

The town council has applied for the power to take action against retailers who flout the rules.

The town council wants the order extended to cover the disposal of commercial waste in an attempt to keep the town clean and tidy during the evenings, especially during the summer when Henley is busy with visitors.

It follows repeated problems with waste collections over the summer as well as shops and residents abusing the system.

Councillor Stefan Gawrysiak, chairman of the council’s waste working group, said: “We’ll say to the retailers ‘put your bags out, say, from 5pm to 6pm, Monday to Friday’ and then they will be collected.

“If a retailer then puts their bags out before or after that time, the council would have the ability to fine them.

“Until now we have had no powers to do anything. Any retailer in Henley can put out their bags at any time and the council is powerless to do anything about it.”

Cllr Gawrysiak said the details of the clampdown, including the level of fines, were still to be worked through and would be discussed by the council’s town and community committee.

Last month, trade waste was found piled up around the public bins outside Starbucks in Market Place and along Friday Street.

Cllr Gawrysiak said Starbucks staff had put its bags out at 10am rather than keeping them inside until later in the day when they were due to be collected.

The company apologised, saying staff were confused about the collection time.

Cllr Gawrysiak said the proposed crackdown would be part of a “hearts and minds campaign”.

He explained: “It’ll be saying, ‘we’re providing this service through our waste contractor, please use it between those times so that we can have a nice clean Henley’.

“I would hope that we never have to issue a fine.”

Cllr Gawrysiak, a member of the council’s ruling Henley Residents’ Group, said he wanted the scheme in place by March in time for the summer season and said the council would consult businesses.

“We are talking to them and most of the retailers are complying and are extremely happy with what we’re doing,” he said.

“I’m absolutely convinced they will be four-square behind this.”

Councillor Julian Brookes, a member of the waste group and leader of the Conservatives on the council, said the threat of a fine was “reasonable”.

He said “I hope we never have to use these powers but if you have got 99 per cent of retailers keeping their rubbish inside and somebody dumps theirs for tourists to see what impact does that have?”

Meanwhile, the council is set to pay £8,000 for a licence in order to store commercial waste at its depot off Reading Road after the current operation was found to be illegal.

It has been taking waste to the site for months but was then told by the Environment Agency that it didn’t have a permit and must comply with the law.

Councillor Gawrysiak said that after the first year’s fee the licence would cost £1,000 per year.

He said: “I would rather we weren’t spending £8,000 but it does mean the streets of Henley from 5pm to 6am are completely clear of waste which, of course, helps the night-time economy.

“The waste group will be recommending to full council that we apply for a waste permit licence and for planning permission to regularise the depot and to bring it into line with what the Environment Agency wants.”

This meant the rubbish was left in the streets all night, sparking concerns about the effect on the town’s night-time economy, particularly during Henley Royal Regatta and the Henley Festival.

The council began using the depot to store the waste and negotiated with Grundon to resume evening collections.

Cllr Gawrysiak said he had walked the streets at the weekend to identify any businesses putting out waste when they shouldn’t.

“There were a couple of bags in Hart Street and I’ve identified the shop owner that put them there and I’ve asked them not to,” he said.

“In Friday Street we had seven Biffa bags and I went through all of them to try to identify where they came from and I failed.

“It was a combination of coffee cups from a variety of coffee shops, cigarette packets and general rubbish.”

The district council has also written to a householder in Friday Street and another in Bell Street warning them about fly-tipping.

Cllr Gawrysiak said: “I think we’re in a very good place with regards to commercial waste on the streets.

“We’re down to a few householders and the odd commercial retailer that put their bags out at the wrong time.”

“I think it’s reasonable because we have all got civic pride whether we’re a business owner, a councillor or a member of the public,” she said.

“You’d obviously get a warning first but you’d only get a fine if you deliberately flouted that time frame for putting rubbish out. I don’t think it’s draconian — it operates in other towns like Reading.”

District councillor Joan Bland, who runs the Asquiths teddy bear shop on the corner of Bell Street and New Street, said: “It’s probably a good idea but I don’t like all this bureaucracy.

“I think a much better way is to go and speak to the business owners and let them talk to their people who dispose of their rubbish and make sure make they do it.

“I think businesses should take more responsibility for their rubbish. I never have waste outside the shop for very long — the majority of it I actually recycle. I think the restaurants have the most problems because they have a great deal of litter every day.”

Joseph Grant-Evans, manager of Cafe Copia in Market Place, said the shop put its waste out after 4pm when it had stopped serving food and the bags were then collected by Biffa, another contractor.

Neil Ainsworth, landlord of the Argyll pub, also in Market Place, said: “We don’t actually use that facility ourselves, although we’re in the night-time economy.

“Rubbish and commercial waste is put out in the street and there’s a temptation for some people to spread that about a bit and that does hurt the Market Place.

“It’s an inconvenience for our customers and it’s pretty unsightly. I think the retailers have to be responsible for their waste.”