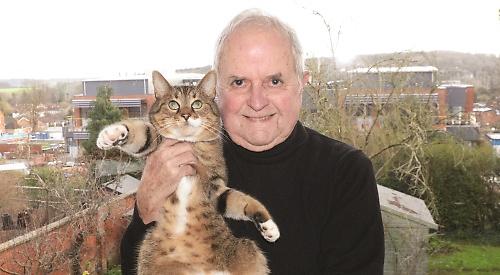 The 79-year-old, of Hop Gardens, pictured above with his pet cat Maurice, was best known for playing Bob Ferris in the BBC sitcom The Likely Lads and its follow-up Whatever Happened To The Likely Lads?

Announcing the news on Twitter, his agent Michelle Braidman said: "Rodney was a true one-off. We will miss his charm and ready wit."

Bewes, who was born in Yorkshire and grew up in Luton, was also the first presenter of The Basil Brush Show when it launched in 1968 and appeared in the films Billy Liar, Jabberwocky, The Wildcats of St Trinian's and the 1984 Doctor Who serial Resurrection of the Daleks.

He married his second wife Daphne in 1973 and the couple moved to Henley in 2000. She died in the spring of 2015 following a stroke.

In 2012 the father-of-four was featured in the 100 Faces of Henley book, which featured photographs and biographies of noteworthy residents and was sold in aid of various good causes in the area.

A full story will appear in this week's Henley Standard.