On your bike, boys! 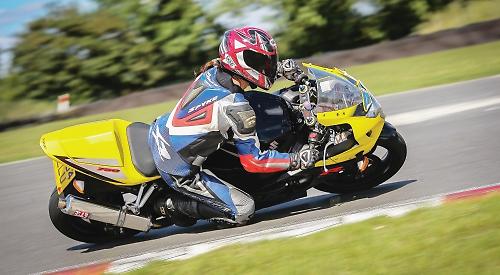 NO, this photograph is not from some dubious calendar on a repair shop wall.

In fact, it shows two women from the Henley area who are helping to challenge the stereotypical image of motorbikes being boys’ toys.

Charlotte Snowden and Julia van Deventer are part of the UK’s only all-female motorcycle racing team that will be competing together for the first time next year.

The eight bikers who make up the Iron Maidens will be taking on their male counterparts in the No Limits racing endurance series.

This consists of nine rounds of different length races at tracks including Donington Park in Leicestershire and Oulton Park in Cheshire from March to October.

So what is it that appeals about travelling at speeds of up to 200mph inches from ?

Ms Snowden, 44, a professional photographer from Checkendon, said: “I like the speed and freedom.”

She has been riding since she was about 16. “My father Paul Fenton bikes — he still rides vintage bikes now — and used to take me on the back of his MZ 250 and it was born from there really.

“I did two seasons with a ladies’ racing team back in Australia in 2005 and 2006 when I lived there.

“I raced when I was two months pregnant with my daughter Audrey and when she was two months old I went straight back to racing. I used to breastfeed her in the garage while waiting to race and I would hand her to my husband and then go out on the track!”

The pair, who both ride Suzuki GSX-R bikes, have been practising in preparation for the real thing.

Ms Snowden said: “I am very much looking forward to racing with the other ladies in our team, as well as the chaps, in my first year in the No Limits paddock.

“The idea of the team is to let women of all abilities go racing and we’re all feeling very confident. I want to go out and ride my motorcycle to the best of my ability while supporting my team members to do their best. We’re all there to race and I just can’t wait for it. I think it’s going to be great.

“I think that we will be very competitive with the men and the men will enjoy riding against us.

“Motorcycle racing is a sport that’s open to everybody and there’s no reason why women can’t do it. Anyone can go fast — just pull the throttle back!”

Miss van Deventer, 34, a sports massage therapist, who lives in Makins Road, Henley, has ridden motorcycles for years but not raced previously.

She said: “I got involved with the team because I have been toying with the idea of racing for a while but I have been quite nervous about entering into a really male-dominated sport without any support.

“When I saw Iron Maidens existed and they were recruiting for new members, I spoke to the team owner Joanne Wingate and was really sold on the idea that there was a support structure in place.

“All the finer details of racing that a new racer wouldn’t know about, like scrutineering and tyre choices, are things you get help with. That makes a big difference rather than just turning up at a race and doing it all by yourself.”

Miss van Deventer, who works at , off Marlow Road, is excited and apprehensive about competing.

She said: “Racing is so different to doing track days. It’s something I’ve wanted to do for such a long time but have never had the opportunity or been brave enough until now.

“I’m really proud that Jo has taken the bull by the horns and created an opportunity for women.

“I’m just going to be there for the experience and to earn my stripes. If I can hold my own and learn I will be absolutely delighted.”

The Iron Maidens were founded in 2014 by three women and have been building race experience ever since as well as growing in numbers.

Ms Wingate, from Bristol, said: “It’s just brilliant for women to have this available to them. It’s about girls who have just stepped out from track days and started racing.”

The team is seeking sponsorship to help cover the £7,000 cost of entry fees next year. If you can help, call Ms Snowden on 07933 327437 or email Ms Wingate atiron.maidens@outlook.com