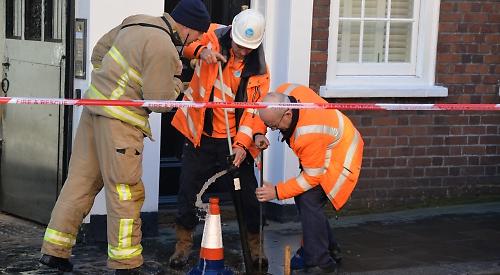 HOMES and businesses were left without power and a couple’s basement was a water main burst in Henley town centre.

Three fire crews were called to the scene and electricity to nearby homes and businesses was turned off while the water was pumped out of the basement.

Firefighters spent about four hours at the couple’s property, using a specialist “ ” machine to suck out all the water before the power could be restored.

The force of the water created a hole several inches across in the ceiling of the basement.

Meanwhile, engineers from Thames Water were called in to stop the leak and repair the pipe.

They were delayed by about half an hour because the drain they needed to access to shut off the water main was incorrectly labelled as a gas pipe. Engineers from Southern and Scottish Electric were also called in.

Mrs Conroy, who runs interior design shop Adventures in Living in Market Place, said she came downstairs at about and found her power was off. She went to check the fuse box in the basement only to discover a foot of water. Mrs Conroy said: “The lights wouldn’t turn on so I thought the electricity had tripped. I went down to the basement, having not been outside at that point, and there was water a foot deep.

“Thank goodness I was there. I don’t usually go down to the basement in the morning.

“The fire brigade were brilliant — they came very quickly. Thames Water very good, too. They were all trying to sort it out.”

During the drama, water could be seen rising from under the York stone pavement outside Mrs Conroy’s home and the area was cordoned off by firefighters.

Buses were forced to the road to pick up and drop off passengers after the bus stop was blocked by emergency vehicles.

Homes and businesses were left without power for about half an hour while the supply was isolated but it was cut off from the Conroys’ house until firefighters deemed the property safe again.

Several nearby businesses were forced to close during the power outage, while others were unable to take card payments. Henley town hall was also affected.

Elaine Moore, of Bodywise Health Foods in Market Place, said the store was in darkness during the power cut.

She said: “We let the shop owner know as he lives in Pinner. We could serve customers but had to do cash transactions only as the card machines were down.

“We were told we needed to make everything safe and it lasted about half an hour. Our basement is a bit damp but there’s no damage.” Staff at clothing store said they had to close the shop but Cafe Copia next door remained open.

Roger Cole, of Henley Baptist Church at the d:two centre, said the power cut had caused hundreds of pounds of damage to electronic boxes and computers which control most of the centre’s systems.

Firefighter James Blake said: “There was a burst water main next to the house. The electricity was isolated and we pumped all the water out, using specialist equipment to remove as much as possible.”

The Thames Water engineers replaced a section of the main in the afternoon.

A spokesman for Thames Water said: “We’re really sorry for the disruption a burst on our pipe caused.

“No water supplies were affected and we worked closely with Southern Electric to restore power as quickly as possible.

“We have customer reps assisting the affected property owner.”

The Conroys have put the matter in the hands of their insurers.