Little Aussie bringing joy to lives of elderly and unwell 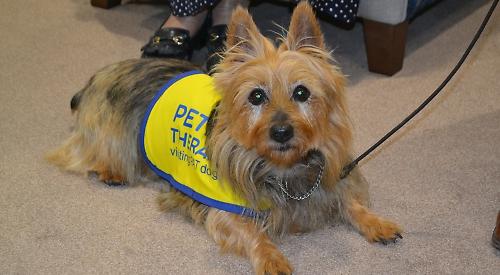 FOR most people, growing old comes with the hope that we will have friends to share our twilight years with.

But for the residents of one Henley care home, this companionship comes in an unexpected — and furry — form.

The residents of Chilterns Court are visited weekly by Tallulah, a
13-year-old Australian terrier, as part of a scheme run by Pets as Therapy, a national charity founded in 1983.

Tallie — as she is called by her owner Jean Garon — has worked as a PAT dog for more than 10 years and spends at least an hour at a time at the home off York Road.

The charity, which is largest of its kind in Europe, will assess any dog put forward by their owner to visit places such as hospitals, hospices, care homes and special needs schools.

Ms Garon first became involved with therapy dogs when she lived in Marlow and took her black Labrador Phoebe to the town’s hospital.

When Phoebe died she put forward Tallie, then five, for assessment by the charity and the dog was accepted.

Ms Garon bought a small “uniform” for her pet and the pair began visiting the Marlow Community Hospital and then Harwood House care home in Cookham Dean.

They even met Theresa May when she opened a wing at the home in 2011 as home secretary.

Ms Garon, who now lives in Leicester Close, Henley, with her lawyer husband John, recently retired from running her own PR company in the pharmaceutical and health sector.

She said: “I first became involved with the charity many years ago when I helped them formulate and execute a national PR programme to raise their profile, working on a pro-bono basis, and they have gone from strength to strength.

“Even when I was working flat out I wanted to put something back, as it were, so this was the natural environment for me and my dogs have enjoyed it over the years.

“The first time I went was to Marlow Hospital and that’s when I could see just how the dog, who asks nothing but gives all, helped people who were feeling isolated and lonely.

“When they heard the dogs’ claws clicking on the floor and coming to their bedside they would sit up and often speak to the dog rather than me, preferring to tell them how they felt rather than a person. This was often a great help when I debriefed the nursing staff later.”

Tallie is a double class winner at Crufts and now visits the show every year to man the Australian terrier stand wearing her yellow PAT dog uniform.

She also has legions of admirers at Chilterns Court. Brenda Clokey, 91, who has been a resident since May, said: “I was so delighted when I had a licking for the first time! I remember one person here a few days ago who was utterly down and this cheered them up.

“The dog needs to be of a certain temperament — some dogs might bite a little bit but this one you can go on cuddling and cuddling.”

Gordon Eaton, 95, who moved to the home last year, said: “I like dogs and always have done. I used to have one just like this.

Joyce Waldon, 93, said: “I always had dogs and horses and I love dogs and love spending time with them.

She said: “We go over three floors visiting everyone. People in bed don’t have to get up and some of them love dogs more than people.

“They feel something like Joyce did. She was asleep in her armchair but perked up and got up to see Tallulah. Usually she’s quite dizzy but suddenly she’d forgotten that.

“Because they are living with dementia the dogs help them remember dogs from their past. They can tell you everything about those dogs: what type they were and what their names were. One resident’s husband trained dogs who used parachutes in the army and told me this story after seeing a dog.”

Ms Garon says these visits can have a profound impact on the dogs too, such as when Tallie comforted a resident at a care home in Cookham who died soon afterwards.

She said: “Tallie pressed herself so close it was difficult to move her and when I did, the care home cat jumped straight up and lay pressed close to the dear lady, who died shortly
afterwards.

“Tallulah was distressed for days and would not eat or go near that bedroom for weeks afterwards when I visited.

“That lady adored Tallie and, unbeknown to me at the time, she left £500 to her in her will, which we donated to the charity.”

To qualify, a dog must be at least nine months old and must have spent six months with their owner.

Temperament assessment tests show how they react to unusual situations, sounds and stimuli and how they deal with strangers. The charity also certifies cats.

Ms Garon said: “The tests are very onerous. One for Tallie involved being asked to walk on and even I had no idea of what was happening behind me, which was a wheelbarrow full of garden implements being tipped on to the concrete. Tallie had to stay steady and not panic.

“This is essential in a hospital environment where you might be weaving your way on the wards where blood and fluid transfusion equipment stands by people’s beds. Dogs have different temperaments, just like people, and occasionally assessors have to reject dogs. They are extremely careful who they pass.”

When Ms Garon moved to Henley last year she and Tallie were taking time off therapy duty before her friend Lord Remnant, who lives in Northfield End, suggested they should take it up again at Chilterns Court, which he had recently opened.

Ms Garon said: “He approached the care home, where his wife Serena volunteers. It took about four months to get security clearances. I was then interviewed by the manager in charge of all the volunteers, along with Tallie, before being accepted.”

Lord Remnant said: “It’s difficult to avoid being a bit lonely in a place like this. My wife used to go up to Townlands for a couple of hours and talk to people.

“This scheme is entirely different and well proven to be enjoyed by residents. Tallulah looks like she’s enjoying it too and for the people she meets it really makes a difference to their lives. It’s marvellous.”

Ms Garon says Tallie’s breed is renowned for their excellent sense of smell and has been used to work in schools for children with epilepsy.

She said: “They can sniff the chemical change which might indicate the child is about to have a fit and go up to the teacher and warn them.

“Tallie is now a teenager so maybe that’s what I will do next at a local primary school. It must be quite tiring for her to keep walking around the wards — not that she is showing any less enthusiasm on her visits — and perhaps Bonnie can step into her shoes in time.”

Ms Garon says visiting care homes with Tallie has been a rewarding experience and she would encourage other dog owners follow her lead.

She said: “When you’ve had a busy career it’s a nice thing to do.

“The important thing is to come in regularly and establish a rapport. The residents look forward to seeing the dog and now they know I’m coming at a certain time on a certain day.

“Even if people don’t have a dog but love them maybe they could join in with sponsored walks to help fund-raise for the charity and extend its reach. These dogs are needed more and more in hospices too, especially those for children.”

Ms Garon says she has always thought of her dogs as her “health insurance policy”.

“You have to go for a walk come what may and you feel better for it and make decisions with greater clarity,” she said.

“I generally walk around five miles a day and Tallie still walks cheerfully like the dinky die Aussie she is.”

For more information about the charity, visit www.petsastherapy.org