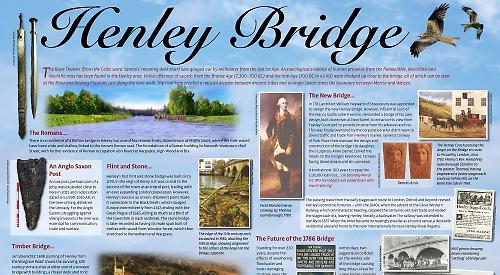 A PLAQUE detailing the history of Henley Bridge has been installed.

The £1,200 information board was unveiled at Singers Park in Thames Side, a short walk upstream from the 18th century crossing, on Saturday.

It was researched by Viv Greenwood, a member of the Henley Archaeological and Historical Group, and created by professional designer Mark Baker. It was paid for by Henley Town Council, which owns the riverside spot.

The plaque is the fourth to be installed in the town under a joint initiative between the group and Henley town councillor David Eggleton.

The town’s first flint and stone bridge was built in about 1170, during the reign of Henry II.

It helped strengthen the town’s trade links with London but also made it vulnerable to major pandemics like the Black Death in the 14th century and Great Plague of 1665.

It was immortalised in Jan Siberechts’ 1698 painting Henley from the Wargrave Road, which shows the original stone arches and wooden structures atop it. By then it had been damaged because of skirmishes during the Civil War and it was further damaged by flooding in 1774.

The new bridge was built in 1786 after Parliament awarded a £10,000 loan towards the project.

It was designed by architect William Heyward and was briefly mired in controversy when Sambrooke Freeman, an influential lord, bid unsuccessfully to build his own bridge at the foot of New Street.

The cost of the project was met by charging a toll and there was great celebration when the loan was repaid and the tollgates were pulled down in 1873.

The plaque notes that the Grade I listed bridge faces pressure from growing traffic volumes and mentions that it was damaged during this year’s royal regatta when a lorry struck the balustrade, loosening one column and dislodging another. This should be repaired next spring.

It also includes old photographs showing the Thames in flood at the bridge in 1894 and of divers checking the supports for subsidence in 1907, both provided by historian Anne
Cottingham.

There is also a reproduction of Siberechts’ painting from the River & Rowing Museum in Mill Meadows.

Mrs Greenwood said: “It was fascinating to research and I learned so much that it was hard to decide what I should leave out.

“For example, no one knew there was so much Anglo-Saxon activity here. They certainly fought the Vikings at Reading and it’s possible the wharf from that period was used to transport flint to build Reading Abbey as it would have been difficult by road.

“The story about Sambrooke Freeman was intriguing because he was determined that his bridge would be built and went all the way to Parliament to have his wicked way.

“I think it’s really important that people learn about these things because Henley made its money from its connection to London, so it’s a big part of how the town became so wealthy.”

Councillor Eggleton, who attended the unveiling with the Mayor Kellie Hinton and other town councillors, said: “The plaque looks brilliant and I think it’s important that we carry on with the project so that people understand how Henley became the town it is today.

In 2015, the first board in honour of Henley minister and inventor Humphrey Gainsborough was installed at the housing estate off Greys Road named after him.

Last year, a plaque celebrating the Makins family’s contribution to Henley was unveiled at Makins recreation ground, also off Greys Road, and another on Henley’s 18th-century obelisk was installed beside the historic structure at Mill Meadows.

It is hoped that more plaques will be installed on the subjects of Henley during the Civil War, the Siberechts painting and the construction of the Great Western Railway, to which the Henley branch line is linked.

Councillor Eggleton said: “We’ve had a lot of positive feedback about the other plaques as they encourage people to go away and find out more about those subjects.”