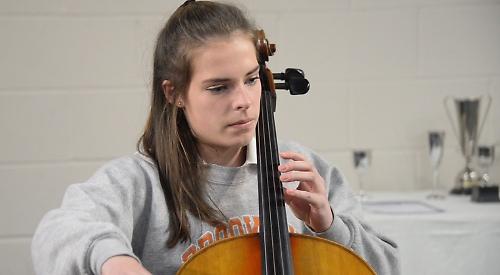 A VIOLINIST has won this year’s Henley Young Musician competition.

Anlan Huang, 12, was one of nine children who performed at the final, which took place in the music department auditorium at Shiplake College on Sunday.

She said: “It’s really nice to win because everyone played really well, so I didn’t know whether I would win or not. My parents are going to be very proud.”

Anlan, who lives in Lower Earley and attends Kendrick School in Reading, has been playing the violin for six years and is currently working towards her grade eight exam.

The second annual competition, a joint initiative between Henley Music School and the Rotary Club of Henley Bridge, was open to entrants from years seven to 13 who are working towards grade five or higher in their chosen instrument.

Thirteen youngsters entered and took part in heats before Sunday’s final, which featured another violinist, a singer, two pianists, a guitarist, a clarinet player, a cellist and a recorder player.

Each played a piece of their choice for adjudicators Ian Brown, a pianist and conductor who has performed as a concerto soloist for many of Britain’s leading orchestras, cellist Jane Salmon, who grew up in Henley and is a member of the Birmingham Conservatoire’s resident Schubert Ensemble, and Christine Cairns, of the National Youth Choir.

The other participants included last year’s winner Matthew Prior, 13, who played the recorder, and Ava Reineke, 14, a violinist, and her sister Mae, 17, who played the cello. Their mother Laura founded the music school. Mrs Reineke said: “Everyone did brilliantly, not just on the strength of their performance but simply for taking part. It was really good fun and nice for the children to be working towards something other than an exam.

“The standard of performance was very high and I was pleased to see such a variety of entrants on different instruments. They all worked very hard and should be proud.”

Mr Howell, who plays the organ, said: “I was very impressed with the high standard of talent on show. Fortunately, there isn’t an organ at the college so I couldn’t be called upon to give an impromptu performance!”

Councillor Hinton, who attended with her seven-year-old daughter Hallie, said: “It was a lovely afternoon of music. The young winner, who played first, really set the tone and gave a phenomenal performance considering her age. It’s great to see Rotary supporting young musicians because the subject often isn’t seen as part of the main curriculum.”