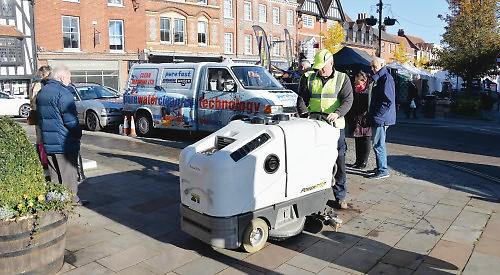 A DEMONSTRATION of a street cleaning machine has been given to Henley town councillors.

The gas-powered scrubber can remove dirt, stains and chewing gum from pavements.

The demonstration was given by Clean Machine, of Wallingford.

Deputy Mayor Lorraine Hillier said: “This was the machine’s cheaper version, which was a push-along, and I had a go with it.

“It is very easy to use and store but I am not sure whether it is enough for what we need it for.

“In the New Year we are having a demonstration of an all-singing, all-dancing machine, which is a ride-on.”

Clean Machine director Ian Monk said: “With this you can clean the pavements quickly and in an environmentally friendly way.

“The gas-powered machine uses water rather than chemicals. It’s got a high-powered brush underneath which scrubs the pavements and sucks up the dirt.”

The council has discussed spending up to £70,000 on a machine to deep clean the York stone pavements in the town centre. It could buy or hire a machine and has been asking for quotes for from several operators.