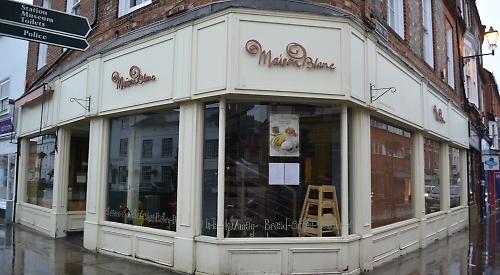 A NEW “artisan” coffee shop is set to open in Henley in the New Year.

Harris + Hoole is expected to take over the former Maison Blanc premises on the corner of Hart Street and Duke Street, making it the town’s 13th coffee shop.

It comes as one of the town’s seven charity shops announced it was closing.

Harris + Hoole, which is owned by the Caffè Nero chain, already has 36 outlets, mostly in London and the South-East.

Its name is derived from two characters in a Covent Garden coffee house in the diary of Samuel Pepys from 1664.

The company is currently advertising for an assistant manager, shift manager and two baristas for the new branch, which will be its first in Oxfordshire.

Town manager Helen Barnett said: “I’m delighted that a key unit will be filled. They will make that corner look fabulous. It’s a shame they are not coming in before Christmas. They are a quality retailer who will do a good job with that unit. It was a really popular coffee shop as Maison Blanc and hopefully that popularity will return.”

Maison Blanc shut in March following months of uncertainty over its future. It opened in 2009 at the former Toni & Guy hairdressing salon.

A closure date has not been confirmed but the pet welfare charity is in consultation with the staff and volunteers.

A spokeswoman for the charity said: “We have two staff and 14 volunteers who will be affected. We are looking at other opportunities for them within Blue Cross.”

Mark Corbett, Blue Cross’s head of retail and enterprise, said: “Sadly, rent increases have made it impossible for us to stay in Henley.

“We’d like to thank the staff and volunteers for all their hard work in the shop and pass on our thanks to everyone in the town who has supported Blue Cross over the past decade.

“Because of rent increases we are constantly looking at all of our shops across the UK to ensure we are making as much money as possible for the thousands of sick, injured and abandoned pets we help every year.”

Ms Barnett said: “Christmas is always a watershed anyway for retailers. I expect a couple more will probably go in January but they will be replaced by others in the spring. It’s always quite healthy to have a change in tenant mix.

“We would like some more independent retailers if we can get them. I know that our agents are working hard to do that.

“Our rents are much lower than other places but there are A-zones which are going to have higher rents than other areas further out of town.”

News of the closure comes just a week after the Henley Standard reported that Duke Street was to get its sixth charity shop with the opening of the Thames Hospice shop today (Friday) at the former No 27 menswear premises.

The ribbon-cutting ceremony was due to be performed by Angie Best, a personal trainer, along with Mayor Kellie Hinton and the charity’s chief executive Debbie Raven.

The “boutique” shop is the charity’s 18th and one of 10 new retail outlets designed to increase the income needed to fund extra services.

Julie Rowley, director of retail at Thames Hospice, said: “We look forward to welcoming customers to browse our quality range of donated goods and new products.”