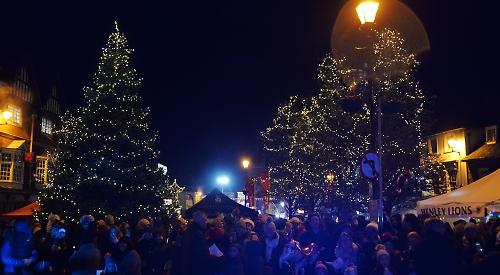 THOUSANDS of shoppers packed the streets of Henley for the town's annual Christmas festival on Friday night.

Streets in the town centre were closed to traffic as market stalls and fairground rides were set up for visitors to enjoy. Schools, charities and community groups also had while a choir of pupils from Gillotts School were singing carols for charity.

The evening began with a torchlit procession along the from the River and Rowing Museum in Mill Meadows to the Kenton Theatre in New Street, where children could visit Father Christmas in his grotto.

Mulled wine was served at the theatre's café and bar while members of the Henley Amateur Operatic and Dramatic Society sang carols.

Meanwhile, shops stayed open until late and there music and dancing at the town hall steps including a half-hour performance by horn players from the Henley Symphony Orchestra, which was the opening act of this year's Henley Living Advent Calendar.

The town's Christmas tree was switched on by Lottie Baker, 11, a pupil at Valley Road Primary School, who won the Mayor of Henley Kellie Hinton's Christmas card design competition. Afterwards, the crowd sang carols accompanied by an orchestra.

For the full story and pictures, see this Henley Standard.