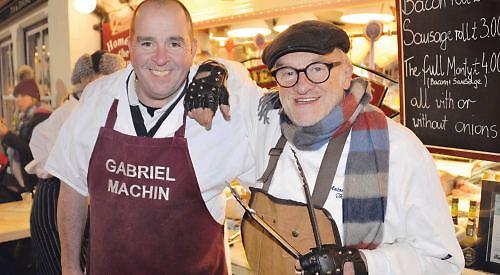 Pubs and restaurants said they had enjoyed some of their best ever sales and footfall but some shops claimed trade and takings were the worst they’d known.

Laurence Morris, who runs Laurence Menswear in Duke Street, said the evening was “very disappointing” and blamed the smaller number of stalls and fairground rides outside his premises compared with previous years.

He said: “There wasn’t much along the length of Duke Street so we didn’t get as many people through the doors, though I’m sure sales will pick up over the rest of the festive season.

“People did come in for mulled wine and mince pies and we managed to collect £240 for the Thames Valley Air Ambulance service.

“I gather it was pretty busy in other areas but there needs to be more balance so that all four streets running off the main crossroads have something going on.

“It seems unfair because they close our road every year but this time they didn’t give us enough attractions to actually bring people in.”

Carol Giles, assistant manager of the Temptation gift shop in Bell Street, said the food stalls outside her premises were overpriced and badly organised as they blocked access for shoppers.

She said: “Many of the stalls were parked on the pavement and one was obstructing a dropped kerb, which made it difficult for a regular customer of ours who uses a wheelchair to reach us.

“Her husband was struggling to lift her on to the kerb and I asked one of the organisers for help but he was very patronizing. I’ve complained to the town council.

“Business was still good but I’ve been here four years and it was definitely the weakest yet. They really ought to put those food stalls further down towards the river and have more going on in Duke Street as well.

“All we had was extortionately priced food and it wasn’t even being sold by local caterers or bringing extra trade to local shops. I was not impressed as people are getting fed up with being ripped off.”

Michael Riley, who manages the Vinegar Hill homeware store in Duke Street, said: “It went quite well but I think Duke Street was a little bit quieter because there were fewer fairground rides outside. We still had lots of people coming in but last year was definitely busier.”

Hilary Redhead, manager of the Bell Bookshop in Bell Street, said: “It was a good year but not as busy as it has been in the past. Footfall wasn’t disastrous but it was down.

“I wonder whether the festival encourages people to spend money in the shops these days. I’ve been doing this for about 20 years and I think it’s fair to say the event has changed its focus somewhat.

“However, I still think it’s a good advert for the town and the tree looked amazing as always while the Santa’s grotto at the Kenton Theatre worked really well.”

Ondine Carrington, who runs the Al Forno restaurant in Reading Road, The Square in Market Place and the Old Bell pub in Bell Street with her partner Nuno Rosado, was more upbeat.

She said: “Both restaurants were fully booked and with all the extra walk-ins we couldn’t have fitted anyone else in. It was also our most successful night for takings at the pub since we took over in February.

“We were very surprised with the trade at Al Forno because it’s so much further out but it was definitely far busier than last year and The Square was also very, very busy.

“I don’t know why some retailers haven’t done so well but perhaps it’s because people visit to see the tree being switched on and spend money at the stalls rather than going shopping.”

Neil Ainsworth, landlord of The Argyll in Market Place, said: “Friday was one of the best late-night openings ever. There were loads of families enjoying mulled wine and generally appreciating the atmosphere of the pub.

“We sold loads of food and there was a very vibrant, excited atmosphere. I think it’s because the profile of the event is growing — everyone knows when it is and they make it a big date in their calendars.

“I also think businesses are getting better at making the best of the oppotunities it presents.”

Barry Wagner, who owns Gabriel Machin butchers in Market Place, said: “We had a great night. The atmosphere was wonderful and we took a few Christmas orders in the shop while our barbecued sausages had sold out by 8.30pm.

“It was a very successful evening and it was lovely to have a proper chat with some regular customers who are usually busy and in a hurry during the daytime.”

Glen Dinning, of Blue Collar Street Food in Reading, which organised the food stalls in Bell Street, said: “The feedback we’ve had has been fantastic. The traders found it really good and a lot of them sold out.”

Henley town centre manager Helen Barnett said: “We’ve had mixed feedback from businesses this year. Lots of them absolutely loved it and had a brilliant time but the mixed opinions come mostly from Duke Street as there wasn’t so much going on.

“However, I think the traders on Bell Street had a great evening as it was absolutely heaving and went very smootly, albeit with some minor glitches with stalls going in the wrong places.

“We’re having a wash-up meeting in January and all comments will be gratefully received as we want to do these things to the best of our ability and provide something that residents and traders both want.”