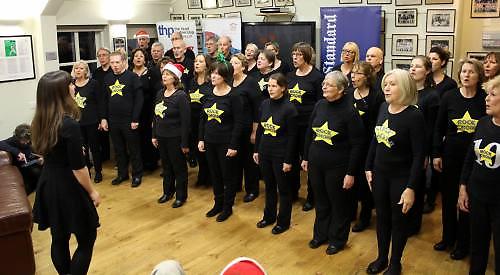 HENLEY Rock Choir dazzled the crowds on the seventh night of the Henley Living Advent Calendar.

About 75 people attended the performance at Henley Cricket Club, where the singers appeared from behind the pavilion changing room doors.

The 33-strong choir was led through a performance by conductor Lucy Hewes.

It included rendtions of Beyonce’s Halo and Merry Christmas Everyone by Shakin’ Stevens.

The evening was in aid of Badgemore Primary School and Henley Mayor Kellie Hinton, who is supporting the school during her term of office, appealed to the audience to donate and buy raffle tickets generously.

The crowds were given winter cider and baked treats, provided by GPC Marketing and Lawlors Bakery.

Once the singers had finished town councillor David Eggleton gave an impromptu follow up performance. He did a magic trick involving a member of the audience and the event’s organiser Richard Rodway.

The duo then presided over the nightly raffle.

Mr Rodway, a partner at the Head Partnership, said it was the best ever fund-raising night at the cricket club.

“It was such a joyful performance and created such a good atmosphere, and with the spirit of the likes of David Eggleton, the Mayor, Nicola Taylor and Phil and Gill Chappell it made for another real feel good occasion.”

Tonight’s performance (Friday) will be held at the The Bull on Bell Street.